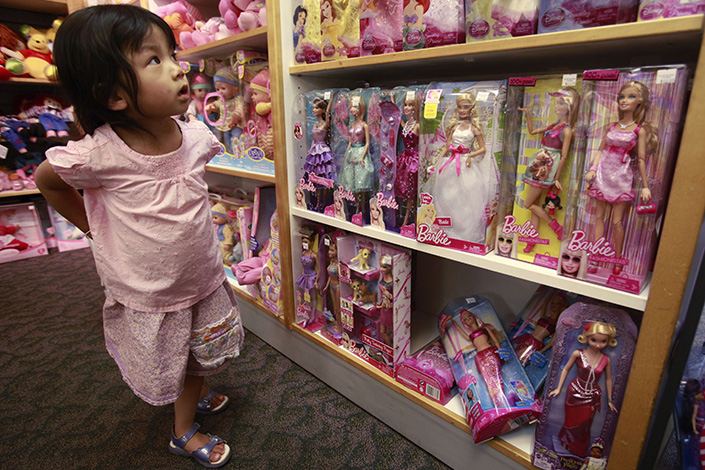 (Beijing) — Leading global toy-maker Mattel Inc. announced a new joint venture to create play clubs in China with local private equity giant Fosun Group, extending a recent series of tie-ups as it ramps up for a major technology-flavored expansion in the market.

On the same day as it announced the venture, the maker of Barbie dolls and Hot Wheels cars said it believes it can boost its China sales by three to four times their current levels by 2020 if it executes well on a broader strategy to create a more-integrated ecosystem of high-tech toys and related services. If that formula proves successful, it could try to replicate that model in the fast-growing India market, it added.

“As we shift our business aggressively in a new strategic direction and transform how we operate, I believe we have the assets to achieve this vision and shape the future of the toy industry,” said Mattel CEO Margo Georgiadis, a former top Google executive who was hired this year by the traditional toymaker for her high-tech background.

“The strength of the underlying Mattel franchise supported by important trends such as a growing global toy market and an increasingly digital, mobile-first world provides an opportunity for Mattel to create significant long-term value for our investors,” she said.

The latest China tie-up will see Mattel and Fosun roll out a new generation of play clubs across the country, they said in an announcement on Wednesday. In an indication of what those clubs may look like, the pair said the partnership will draw on Mattel’s expertise in toys and Fosun’s as a major stakeholder of the popular Club Med family resorts.

They said the facilities will “incorporate hands-on play experiences as part of the educational services offered at the clubs,” with the first center to open next year in Shanghai.

“Parents in China are supremely focused on helping their kids succeed and develop socially and are motivated to give their kids the best possible start to life,” said Qian Jiannong, president of Fosun Tourism Group. “Mattel’s legacy of play expertise and Club Med’s long history of kids’ club expertise, along with both companies’ strong brand recognition, make them the best partners to co-create these learning and play clubs, helping Chinese parents give their kids a truly unique and valuable experience.”

China is one of the world’s fastest growing toy markets, with sales up 7.4% to top 69.3 billion yuan ($10.2 billion) last year, according to market research firm Euromonitor. Mattel is the market’s fourth-largest player with a 2.3% share, behind local leader Alpha Group and Denmark’s Lego Group, with 5.3% and 3.6% shares respectively.

The Fosun venture marks at least the third major tie-up for Mattel this year in China as it tries to lay the foundation for the kind of growth that Georgiadis envisions.

In February, the company announced a partnership with Babytree, which bills itself as China’s largest online parenting community, to develop an early-childhood learning and development online platform. Around the same time, the company formed a strategic tie-up with local e-commerce juggernaut Alibaba Group Holding Ltd. that will see the former sell its products on the latter’s online shopping malls. Under the deal, Alibaba also agreed to supply some of its huge troves of consumer data to help Mattel develop future products for the market.

Shortly after forming those first two tie-ups, Mattel began moving into high-tech toys in China with its launch of an augmented reality (AR) toy called Bodhi and Friends, said Carol Lü, an analyst at Euromonitor. Children can connect the physical toys with a virtual gaming environment by scanning a graphic code, she said.

“Chinese parents prefer toys with intelligent exploitation function. Toys with educational function are popular in the market,” she said, adding that China’s overall toy market could soon get a boost from Beijing’s recent relaxation of its decades-old one-China policy. “Mattel’s learning and play clubs match with Chinese parents’ preference on investing surplus funds towards educational pursuits for their children, which can increase their brand awareness as well as build the brand image of toys with educational function among Chinese consumers.”

The new China push follows an earlier one with a more-traditional low-tech focus for Mattel that ended in a high-profile failure. That endeavor saw the company launch a concept House of Barbie store in Shanghai in 2009, intended as a place where young kids could come with their parents and engage in activities like creating customized dolls. But the store struggled to find an audience, and was shuttered just two years later.