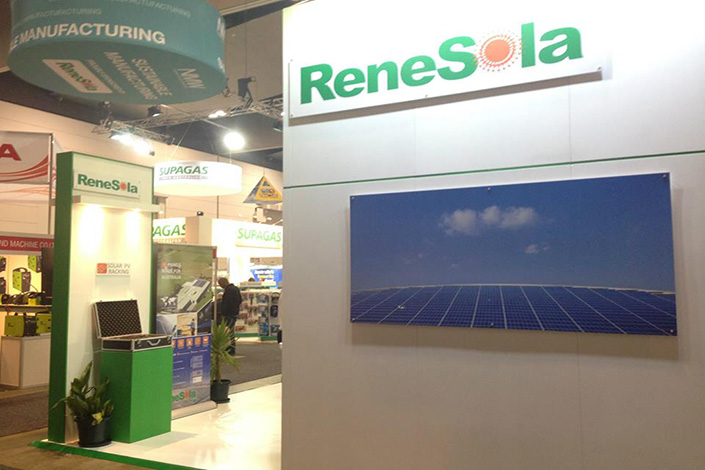 ReneSola Ltd. said it has received a proposal to transfer its money-losing panel-manufacturing business to its chairman. Photo: Renesola Ltd.

(Beijing) — Solar company ReneSola Ltd. said it has received a proposal to transfer its money-losing panel-manufacturing business to its chairman, which would leave the publicly listed entity as a developer of solar power farms.

ReneSola announced the proposal as the global solar panel industry faces a new major downturn, with most companies falling into the red due to oversupply and weak global demand. ReneSola will report its latest financial results on Thursday in the U.S., which could include its third consecutive quarter in the red if it reports a net loss.

To finance the transaction, ReneSola proposed issuing an unspecified number of new American Depositary Shares (ADSs) to Li, based on a price of $4.50 per ADS. ReneSola’s shares rose 5.4% in trading after the announcement came out, but still trade well below that price at their current level of $2.52.

“If the transactions contemplated by the proposal are consummated, the company's remaining businesses would be focused primarily on solar project development,” ReneSola said in a statement.

ReneSola and many of its Chinese peers have increasingly turned to solar plant development as a revenue source to support their core solar panel-making business. Such a strategy typically sees panel makers build solar power plants to create demand for their own panels, and then sell those plants to long-term buyers after completion. But it carries the risk of generating further losses if plants cannot be sold at or above the cost of construction.

One of China’s strongest solar panel makers, Canadian Solar Inc., has been among the most aggressive builders of solar power plants, and has put that part of its business into a separate unit, Recurrent Energy. It had intended to spin off Recurrent for a separate listing in New York, but an IPO has yet to occur. One of the biggest pure-play solar farm developers, SunEdison Inc., declared bankruptcy a year ago after an overly aggressive expansion, underscoring challenges facing that sector.