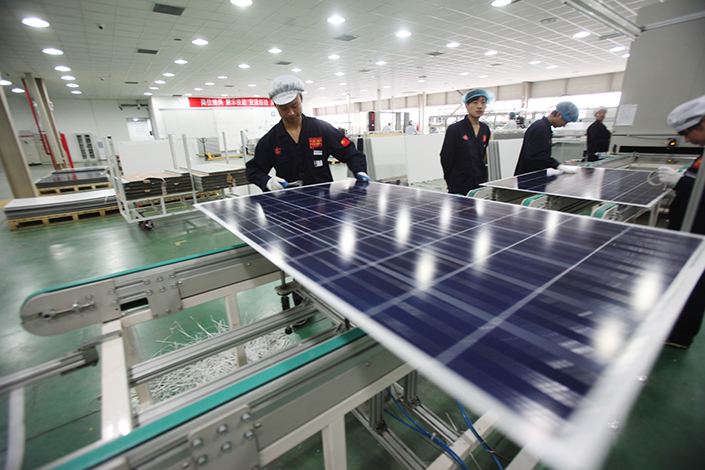 Yingli Green Energy Holding Co. Ltd. has become the latest Chinese solar-panel maker to withdraw from an agreement with the EU designed to avoid anti-dumping tariffs. Above, Yingli employees work on a manufacturing line in Tianjin in March 2013. Photo: IC

At the same time, struggling Yingli Green Energy became the latest Chinese panel maker to withdraw from an agreement with the EU designed to avoid anti-dumping tariffs, as the company cited the latest downturn, which has depressed prices due to weak demand.

“This is looking to be one of the most extended down-cycles that the industry has seen. Exacerbating the problem is there are a number of folks that are looking at the down-cycle as an opportunity to grab market share,” said Gary Dvorchak, whose BlueShirt Group advises solar-panel makers. “The net is, you’re seeing data points that are really confirming the negative outlook we’re getting from everyone.”

China is the world’s largest manufacturer of solar panels, churning out more than half the global output. But Western governments have complained the Chinese industry receives strong government support in the form of policies like low-cost loans and cheap land, prompting the U.S. and European Union to impose punitive tariffs on panels made in China.

A rapid build-up in China dating back nearly a decade has resulted in a new glut for the highly cyclical industry, hurting Chinese exports.

As a result of that situation, Canadian Solar Inc., one of the industry’s strongest players, reported a net loss of $13.7 million in its latest quarterly results, according to an announcement on Tuesday. The result marked the company’s third consecutive quarterly loss, as sharp drops in U.S. and European sales led to a 6% revenue decline for the three months through June.

Separately, JA Solar Holdings Co. Ltd., another major player, said on Monday it had received a revised management-led privatization offer that was 30% lower than the original offer. JA Solar said the buyout group had reduced its offer price to $6.80 for each of the company’s American Depositary Shares (ADSs), compared with the original offer two years ago of $9.69.

JA Solar’s shares are down by a similar amount of nearly 30% since the original buyout offer, while Canadian Solar shares have lost nearly two-thirds of their value over that same period as the current down-cycle builds.

At the same time, Yingli Green Energy Holding Co. Ltd., one of the unhealthiest major panel makers, said on Tuesday it was formally withdrawing from an agreement with the European Union aimed at avoiding anti-dumping tariffs imposed by the trade bloc.

Yingli became the latest of China’s solar panel makers to withdraw from the agreement dating back to 2013, which required signatories to sell their panels at specified prices and in controlled quantities in order to avoid the punitive EU tariffs. Others that have withdrawn from the agreement include JA Solar and JinkoSolar Holding Co. Ltd.

“Given that the average selling prices of PV modules in all major EU markets have continued to decline commensurate with the significantly shrinking market for PV products in recent years, the company believes that the current (minimum import price agreement) no longer accurately reflects the current market price environment,” Yingli said. “The company believes that its continued acceptance of and participation in the … agreement would harm fair competition in the market.”

BlueShirt’s Dvorchak said the current downturn is likely to last well into 2018 and perhaps even longer due to Chinese companies’ reluctance to reduce output to ease the current glut.

“It’s going to be a very painful next year and a half or so,” he said. “There’s a little bit of a different mentality among the industry in China. A lot of that capacity is going to find its way into sales in other regions.”