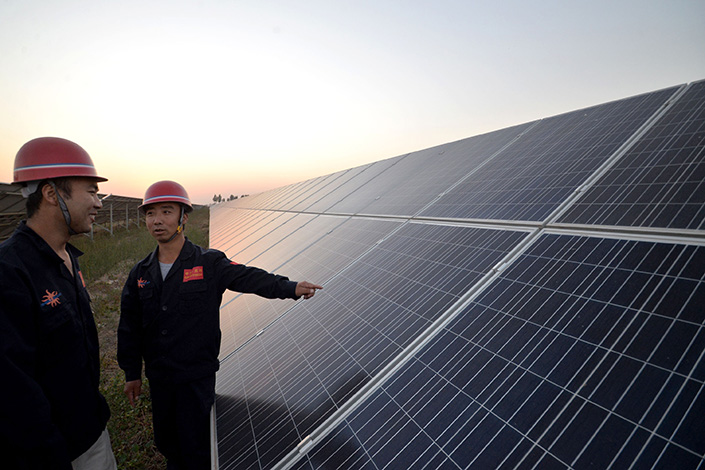 (Beijing) — Two of China’s weakest major solar panel makers, Yingli and ReneSola, said revenue plunged by nearly half in their latest reporting quarters, as a growing sector downturn pushed both into the loss column.

A building downturn is wreaking havoc on solar panel makers worldwide, fueled by slowing demand in major markets and a glut in capacity. Chinese makers, who supply more than half of the world’s total, are taking an even larger hit due to punitive anti-dumping tariffs in the U.S. and Europe, who accuse them of getting illegal government support.

As a result of the downturn, Yingli said its revenue fell 47% to 1.24 billion yuan ($182 million) in the first quarter, while ReneSola said its figure fell 40% to $157 million, according to company announcements released on Thursday in the U.S. Both also reported swinging to net losses in the latest quarter, compared with profits a year earlier.

ReneSola released its results a day after announcing it had received a proposal to transfer its money-losing manufacturing assets to its chairman, which would leave the listed company as a solar plant developer.

“We continue to execute our strategy to shift our business focus from manufacturing to downstream project development, and I am excited about the progress we are making,” ReneSola Chairman Li Xianshou said in his company’s latest results announcement. “For the second quarter of 2017, we expect downstream project sales to increase when compared to the first quarter of 2017 due to continued growth in our project pipeline and our solid execution in project monetization.”

Separately, Yingli also announced that the New York Stock Exchange had accepted a plan that would allow it to maintain its listing, and had given the company until Aug. 9 next year to regain compliance with listing standards. The company had said in February it was in danger of delisting after failing to meet minimum market valuation requirements.

Yingli and ReneSola shares both rose about 2% in New York after their latest earnings announcements, but each has lost about half of its value over the last year.