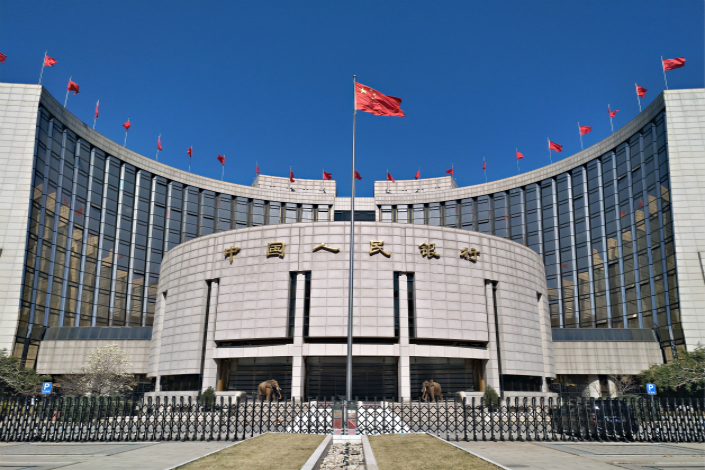 As part of the country’s ongoing campaign to slim down its bloated financial system and rein in hidden and possibly toxic debts, the People’s Bank of China decided early this year that it would take the lead and coordinate with often-territorial regulators, forcing them to work together. Photo: VCG

(Beijing) — Channel lending in China, albeit sprawling, is still caught in a regulatory no-man’s land.

Chinese banks have been skirting more-stringent requirements on capital and loan-loss provisioning by disguising loans routed through non-banks, or so-called “channels,” as asset-management plans (AMPs).

AMPs fetch high returns from investing in high-risk local government financing vehicles, less-capitalized property projects, or companies whose credit profile is too weak to secure conventional bank loans. These AMP-disguised loans as a result have managed to stay off the radar of traditional debt indicators.

The practice of channel lending, which is still legal in China, has been in overdrive since late 2012, when securities brokerages, insurers and asset managers were gradually allowed to be banks’ “channels” alongside trust companies.

Exactly how massive China’s channel business is has been a mystery. According to the Asset Management Association of China, as of the end of 2016, channel loans made through securities brokerages, mutual funds and their subsidiaries stood at 21.45 trillion yuan ($3.15 trillion), which was about a quarter of China’s gross domestic product. This figure does not include channel loans via insurers and trust companies.

This immediately became a headache of the regulators: Is channel lending primarily a concern for the central bank? The regulator of banks? Of securities brokerages? Of insurers? Of asset managers? Or of trust companies?

As part of the country’s ongoing campaign to slim down its bloated financial system and rein in hidden and possibly toxic debts, the People’s Bank of China (PBOC) decided early this year that it would take the lead and coordinate with often-territorial regulators, forcing them to work together.

A rare move led by PBOC

In February, the PBOC proposed a long-awaited overarching regulatory framework on wealth- and asset-management industries that include channel lending.

The framework, still in its planning stage, aims at an outright ban on channel lending. The PBOC didn’t say when the new rule will become effective.

“The planned supervisory framework will apply across the jurisdictions of individual regulatory agencies, thus allowing a more-comprehensive approach to monitoring and supervising systemic risks posed by wealth management and asset-management products,” Moody’s said in a report released on Feb. 27.

“The broader scope of the planned regulatory framework will discourage the use of piecemeal, institution-specific rules and shift regulators’ focus to the underlying economic fundamentals of the financial markets,” the rating agency said.

People close to the regulators told Caixin on Monday that consultation between the PBOC and various financial regulators is still ongoing.

Devil in the details

While the PBOC is heading the right direction, George Xu, an analyst at Moody’s, warned that the success of the intervention will largely hinge on how gradual hidden credits are unwound without causing new stress to the system.

If these hidden loans slow too drastically, borrowers who used to rely on shadow-banking financing will be squeezed off-guard, leaving the financial system even more unstable, he said.

“Such downside risks are probably the reason authorities are opting for a very cautious and gradual pace of policy implementation under both individual and joint efforts,” Xu told Caixin.

Shao Ziqin, an analyst from CICIC Securities Co., echoed the view that avoiding new risks should top the regulators’ agendas.

Fragmented oversight as one of the root causes

“Channel business is unlikely to be weeded out unless the conflict among various sectors and among various regulators are properly addressed,” a senior executive of a major Chinese bank said.

Previous policies by the CBRC and CSRC, albeit piecemeal and uncoordinated, nevertheless yielded some results.

In May, the CSRC also said brokerages should not conduct channel business. That comment, which was not legally binding, came a year after the regulator introduced capital adequacy requirements on subsidiaries of mutual-fund management companies, a move that has largely curtailed their ability to be channels for banks.

“Otherwise, when one valve is closed, another opens,” Wei said.