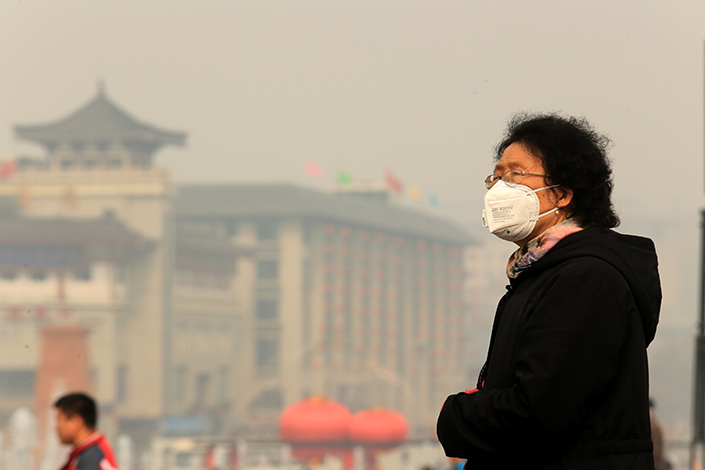 Seven people, including two former heads of district environmental protection offices in Xi’an, were sentenced to prison for over a year for tampering with air-quality monitoring equipment and falsifying readings in Shaanxi province’s capital. Above, Xi'an residents brave the air pollution on Feb. 15. Photo: Visual China

(Beijing) — A court on Friday imprisoned seven people, including two former heads of district environmental protection offices in Xi’an, for over a year for tampering with air-quality monitoring equipment and falsifying readings in Shaanxi province’s capital.

The director of the city’s Changan District Environmental Protection Bureau, He Limin, had instructed employees to “sneak into the air-quality monitoring stations and stuff cotton gauze into air sampling equipment several times in March 2016,” documents from Xi’an Intermediate People’s Court show. The cotton padding filtered out smog particles the same way it does in a smog mask.

The official and four staffers were charged with falsifying computer data. He told the court that he was under “immense pressure” because performance reviews of environmental protection officials were closely tied to fluctuations in pollution readings.

He instructed subordinates to do “whatever it took to lower air pollution readings” and had turned a blind eye after learning about the irregularities, according to court papers. The official was sentenced to 17 months in prison, and two permanent employees who oversaw pollution monitoring in the district received 22-month and 16-month sentences respectively.

Two temporary workers employed by the bureau at the time who were found guilty of data-tampering got 15 months in prison.

The air pollution monitoring station in the district is one of over 1,300 such facilities nationwide under the direct control of the Ministry of Environmental Protection. China has stepped up efforts to improve real-time air quality data and punish businesses that violate emissions quotas, but fake data remains a stumbling block.

Officials in Changan district had gained access to the monitoring station by secretly making a copy of its key when they were asked to assist with the relocation of the facility in February, the court said. They also used password to computers connected to servers at the ministry obtained at the time to alter data.

In a separate case, Tang Shixing, director of the Yanliang District Environmental Protection in Xi’an, was also convicted on the same day for similar violations in February 2016.

Under pressure amid bouts of smog that choked the city during the winter heating season, Tang had told a subordinate — over the phone and in person — to “use whatever measures possible to get pollution readings down,” trial documents show.

Tang told the court that he hadn’t objected after learning the employee had stuffed cotton padding into the monitoring equipment. Tang was sentenced to 17 months in prison, and his subordinate, Zhang Feng, who oversaw air quality monitoring stations in the district, got a 19-month prison sentence.

The scandals came to light after experts at the Environmental Ministry’s air-quality monitoring department in Beijing noticed abnormal changes to air quality readings in Xi’an in March.

These were the latest in a string of cases where Chinese environmental protection officials were found guilty of glossing over air-quality data to improve their own performance appraisals.