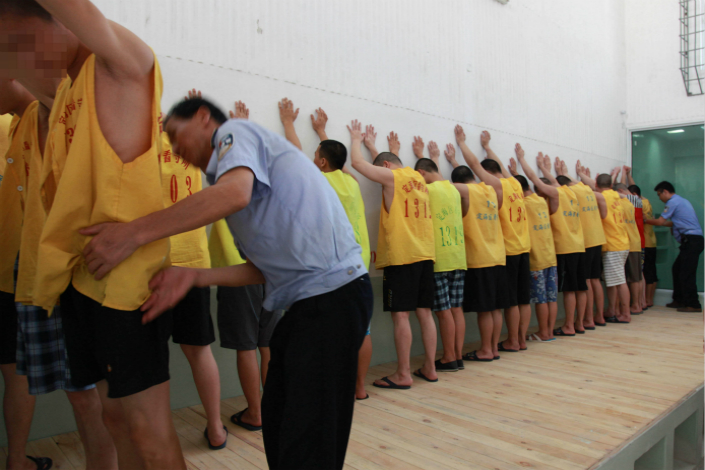 Legal experts say the current draft of China’s first-ever law on criminal detention centers will have a limited impact on reducing police abuse. Lawyers have long called for legislation that would allow courts or prosecutors’ offices to have control over detention centers amid a string of cases where suspects have died in custody. Photo: Visual China

(Beijing) — A draft of China’s first-ever law on criminal detention centers calls for better access to bail and medical care for detainees, but legal experts say it will have a limited impact on reducing police torture. Lawyers have long called for legislation that would allow courts or prosecutors’ offices to have control over detention centers amid a string of cases where suspects have died in custody, allegedly due to torture that officers used to extract confessions.

The best way to prevent rights abuses at detention facilities is to put them directly under the purview of courts or prosecutors’ offices instead of the police, said Hou Xinyi, a law professor at Tianjin University of Finance and Economics.

This would also help reduce the widespread practice of using coerced confessions as evidence in trials, according to Chen Ruihua, a professor at Peking University’s School of Law.

But the draft of the Law on Detention Centers — published by the Ministry of Public Security on Thursday and open for public comment until July 15 — would allow police to retain control of these facilities.

Prosecutors’ offices would be required to supervise detention centers under the draft law.

The proposed law came after a high-profile incident in March 2009 when a farmer named Li Qiaoming died in police custody in Yunnan province. Police initially said Li had “died of injuries while playing a game of hide-and-seek with fellow inmates,” but an investigation later found he was “beaten to death by bullies that police entrusted to maintain order in detention cells.”

Police started keeping audio and video recordings of interrogations after the incident in Yunnan and several similar cases that triggered a public outcry. The draft law would make it mandatory for police to maintain such logs.

The draft law also seeks to better protect detainees’ basic rights, such as access to medical care and bail. It no longer refers to detainees under criminal investigation as “perpetrators” — wording used in a 28-year-old government regulation on detention facilities. Instead, the draft law proposed the words “suspect” or “accused.”

It would also require large detention facilities directly under the purview of city- or prefecture-level police to operate a medical facility on the premises.

The draft law would give access to medical care at public hospitals to pregnant detainees, detainees nursing children under a year old, or detainees with HIV/AIDS or other infectious diseases.

The draft law also contains specific clauses to streamline the bail application process. A detention center would be required to refer a bail application to a local prosecutor’s office for review within two days of filing, it said.

In theory, many detained suspects qualify for bail under current regulations, but the bail provisions were “so weak that bail was hardly granted in the past,” said professor Gao Yifei from the Southwest University of Political Science & Law.

The draft law, pending a review based on public comments and deliberation by the National People’s Congress, China’s top legislature, will replace the Detention Center Regulation that was enacted in 1990.