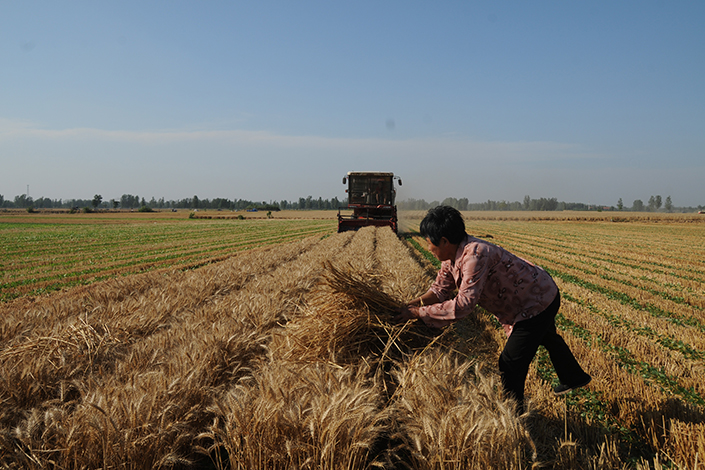 (Beijing) — The Ministry of Environmental Protection says it is running independent tests to verify claims of cadmium contamination in wheat in central China — the latest in a string of food safety scandals linked to soil pollution in the country.

Wheat planted in at least two townships in Xinxiang, Henan province, was laced with the hazardous heavy metal, according to a spokesperson from Airman, an environmental advocacy group in Beijing.

The nongovernmental organization (NGO) had collected 12 wheat samples from fields in two rural townships in Xinxiang in late May and earlier this month. It had them tested at a government-accredited lab in central China’s Hunan province.

The government was testing separate wheat samples at a national lab, Qiu Qiwen, head of the ministry’s Department of Soil Environment Management, said at a news conference in Beijing on Wednesday.

A group of experts from the ministry has visited Xinxiang to make sure the entire harvest from affected fields was sealed pending the results of the test, he said.

But an investigation by Caixin reporters in Xinxiang found that farmers who had cultivated land next to battery factories, most of which were shut down by the government, had hidden some of their harvest.

Stockpiles of allegedly contaminated wheat were then sold to flour mills. Caixin reporters who witnessed several such transactions were unable to quantify the amount of tainted wheat sold.

Henan, the largest wheat producing province in China, accounted for more than a quarter of national output, according to the Ministry of Agriculture.

Soil pollution caused by hundreds of small battery factories dumping untreated industrial waste in Xingxiang, a city that was once hailed as “the Capital of China’s Battery Industry,” may have led to the cadmium-laced wheat, the NGO said.

Exposure to even low levels of cadmium can lead to kidney failure or kidney stones, weaken bones and damage the respiratory system, according to the World Health Organization (WHO). Consumption of the heavy metal, which is used to make nickel-cadmium batteries and semiconductors, can also cause cancer.

Nearly one-fifth of arable land in China is contaminated by heavy metals, including cadmium and arsenic, according to a national survey of soil pollution by the environmental protection and land resources ministries in April 2014.

China is a net importer of staples such as rice, wheat and corn, though small shipments are sold to international markets from time to time.

In an earlier case that rattled consumers, some 120 batches of rice products such as rice flour and rice noodles — mostly from Hunan province — were found in May 2013 to have excessive levels of cadmium. Some products contained six times more cadmium than allowed under the national safety standard, according to the provincial food safety authority. Most of the shipments were sent to the southern province of Guangdong.

In this instance, authorities didn’t reveal the quantity of substandard products that had reached store shelves or whether anyone had reportedly fallen ill after consuming contaminated foodstuff.