China’s Airport Plan — a Pie in the Sky? 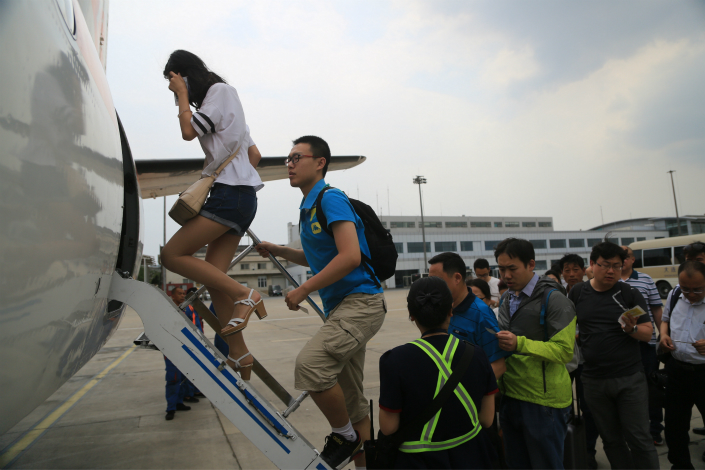 China's State Council wants to build over 500 general aviation airports across the country, but local governments have plans for far more. Above, passengers board a Xian MA60 aircraft in the northeastern province of Liaoning on June 12, 2017. Photo: IC

Is China building too many airports?

Over the next three years, local authorities in China are planning to build more than 900 airports for general aviation — the segment of the industry that includes crop dusting and tourism. The figure is nearly double the central government’s goal of “more than 500” over the period.

A news report has warned that’s just too many airports.

In May 2016, the State Council, China’s cabinet, announced that the country wanted to construct more than 500 general aviation airports to boost the size of the industry to over 1 trillion yuan ($146 billion).

All provincial-level governments except Shanghai, Tibet and the northeastern province of Jilin have since published their own plans for these airports, and their goal is far more ambitious than the central government’s. Together, they plan to build 934 general aviation airports, according to the 21st Century Business Herald.

The number put forward by each region ranges from seven to 200. The three places that intend to build the most general aviation airports are Guangxi in southern China, Heilongjiang in the northeast and Xinjiang in the northwest — all remote and less developed areas, the newspaper said.

Local governments in these regions are the most aggressive because they are keen to drive growth in the general aviation industry by investing in airports. The relatively abundant supply of land and the lower costs of building such facilities in their areas also encouraged the authorities, the report said, quoting Qi Qi, who was identified as an expert in general aviation.

Li Xiaojin, another industry analyst, warned of a possible glut in airport capacity given the country’s rapidly growing market for drones — the unmanned aircraft that don’t need airports to operate, according to the report.

“It needs to be reconsidered whether so many airports are needed given that drones have gradually been taking over part of the general aviation market,” Li was quoted as saying.

Other experts are also skeptical whether local governments have the financial resources to build the airports, the newspaper said, as the central government has increased scrutiny on local government financing vehicles to rein in debt risks.

And given that the country’s general aviation airports have long suffered financial losses, it will be difficult to convince private investors to get on board with these projects, it added.

China had 310 general aviation airports at the end of 2016, barely changed from the “more than 300” it had a year before, according to government figures.

Although it might look as if the country doesn’t have many general aviation airports when compared with the 15,000 in the U.S., many of the airports in China are seldom used because they are so far away from major cities. Authorities have also limited growth of the business jet market, which is the most lucrative business for these airports, according to previous Chinese media reports.

General aviation airports in the southern province of Guangdong were mainly used for pilot training, tourism or government forestry protection missions, the Southern Metropolis Daily reported in 2016. Their operating rates and return on investment were “not really high,” the newspaper said.

In a bid to help the industry expand, the State Council said in its announcement that authorities would open up the airspace below 3,000 meters (9,842 feet) for general aviation, raising the previous limit from under 1,000 meters.