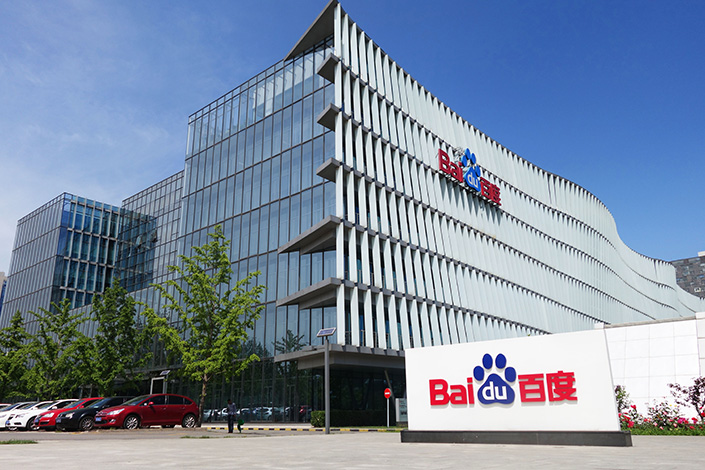 A recent jump in the shares of JD.com Inc. has put the e-commerce company on track to overtake Baidu as the nation’s third largest internet company. Photo: Visual China

China’s internet world is standing on the cusp of a financial milestone, as e-commerce giant JD.com Inc. gets set to pass search stalwart Baidu Inc. to become the nation’s third-largest internet company.

China is the world’s largest internet market with more than 700 million users, giving its homegrown players huge growth potential. Its leading internet companies, Tencent Holdings Ltd. and Alibaba Group Holding Ltd. are each worth about $350 billion — putting them among the world’s 15 most valuable publicly listed firms.

But before that pair’s spectacular rise, Baidu was China’s largest internet company, banking on its early status as China’s leading player in the nation’s lucrative search market. Internet watchers have come to refer to the trio as BAT based on their first initials, as the three posted explosive growth on the back of China’s internet embrace.

But a recent jump in shares of the younger JD.com Inc. has put China’s second largest e-commerce player on track to overtake Baidu this week as the nation’s third largest internet company. JD.com shares rose 3.9% on Friday, giving it a market value of $61.3 billion. By comparison, Baidu’s U.S.-traded stock fell 0.7%, giving it a value of $61.9 billion, just a shade ahead of JD.com.

“The rise of JD and decline of Baidu is purely down to execution in my view,” said Ryan Roberts, analyst at MCM Capital. “Baidu has faced plenty of challenges finding what is next after search, whereas JD has been continually executing its growth and expansion strategy beyond core e-commerce to areas like online finance.”

Over the last year, JD.com’s shares have more than doubled as investors grow bullish about the company’s prospects. Those include a major tie-up with Tencent in 2014, and another with global retailing giant Walmart last year.

At the same time, the company’s bottom line has also shown signs of improvement, following years of losses as it invested heavily to build out its national network and compete with sector giant Alibaba. That effort finally bore fruit this year when JD.com posted a quarterly profit in the first three months of 2017, its first time in the black since it listed three years ago.

By comparison, Baidu has largely stagnated over the last two years as it struggles to identify future growth areas beyond search. The company has poured huge money into travel, takeout dining, group buying services and online video, in an attempt to take a slice of those fast-growing but highly competitive markets.

But all four efforts have resulted in big losses. Baidu sold control of its travel business to sector leader Ctrip in 2015. It previously tried to sell its iQiyi video service in a deal that ultimately collapsed, and recent media reports have indicated it may be trying to sell its takeout dining service as well.

But one of the biggest blows came about a year ago, when Baidu landed at the center of a scandal involving its longtime practice of mixing advertisements with organic search results without properly disclosing that fact to internet users. As a result of that scandal it made major overhauls to its search policy, resulting in two quarter of consecutive revenue declines before finally returning to growth in this year’s first quarter.

If JD.com passes Baidu, it could force people to find a new term for their references to China’s top internet trio, Roberts said. “I think the ‘BAT’ acronym has been beaten to death, and I for one welcome JAT!” he said.