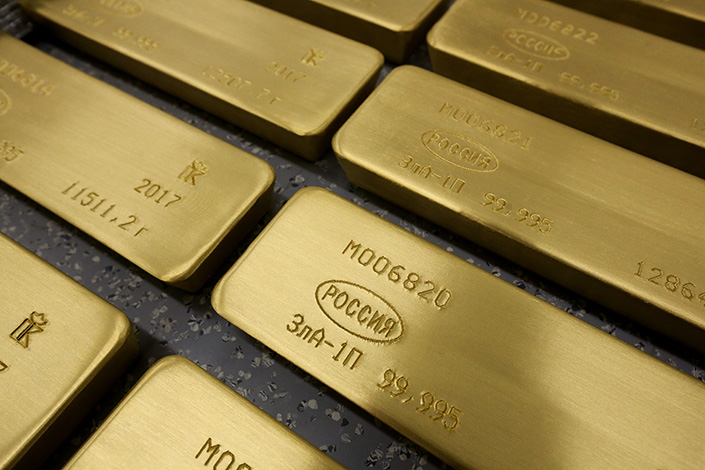 One of Russia’s largest banks is encouraging Chinese lenders to buy gold bars directly from it instead of going through third-party gold exchanges — but Chinese banks are not on board. Above, gold bars are seen at the Krastsvetmet nonferrous metals plant in Krasnoyarsk, Russia, on March 3. Photo: Visual China

(Beijing) — One of Russia’s largest banks is encouraging Chinese lenders to buy gold bars directly from it instead of going through third-party gold exchanges.

But Chinese banks are not on board with Otkritie FC Bank’s idea — at least not yet. Some of them said they will take a wait-and-see approach for now, as they prefer gold bullion to be authenticated and guaranteed by a third party.

China is the world’s largest gold consumer as of the first quarter of this year, according to the World Gold Council. Rising incomes and few investment options in China are driving demand in alternatives such as gold jewelry, bars and coins.

On Tuesday, Otkritie was in a roadshow in Beijing trying to persuade Chinese banks to buy gold directly from the bank, which said doing so would reduce costs of delivery and other transactions for both sides.

Otkritie said its proposal also came after a bilateral summit between China and Russia last month that aimed to boost trade between the two countries.

Otkritie, which buys gold from Russian miners and sells it overseas as a broker, said it has sold 4 metric tons (4.4 tons) of gold to China through the Shanghai Gold Exchange alone since 2015. The Russian bank didn’t say how much gold it has sold to China through other channels, such as gold exchanges in Europe, which are more-popular routes for Chinese banks to buy the precious metal.

Direct sales between Otkritie and Chinese banks could boost annual sales to 80 to 100 metric tons of gold from Russia to China, said Elena Magera, Otkritie’s head of precious metals, at a news conference in Beijing on Tuesday.