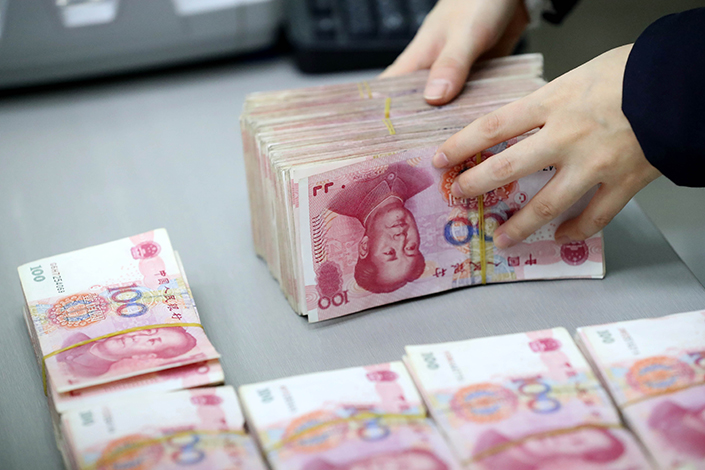 (Beijing) — China’s interbank market, which oils the daily wheels of the financial system, is nearing the end of a month of high tension prompted by fears that the central bank’s deleveraging campaign would exacerbate the traditional June liquidity squeeze and trigger a potentially destabilizing cash crunch.

The People’s Bank of China (PBOC) has been walking a tightrope between giving banks and financial institutions who borrow in the market enough money to stop interest rates from surging, and preventing liquidity becoming so loose that it undermines the drive to force firms to unwind their more-risky debts.

With the finishing line of June 30 in sight, traders and institutions are starting to breathe more easily after the PBOC dosed the market with timely dollops of money. From June 1 to June 19, the central bank pumped around 620 billion yuan ($91.2 billion) into the interbank market through short-term reverse repurchase agreements in open-market operations (OMO) and through its Medium-term Lending Facility (MLF) — loans made to selected banks to provide longer-term funding of up to a year. It was the biggest monthly injection of funds since January, just before the annual Spring Festival holiday, when demand for money soars.

“The central bank has controlled the injection of money into the market very effectively, and we’ve seen little volatility in interbank rates — it’s all been very smooth,” said Ma Yuhuan who manages interbank lending operations at Ping An Bank in Zhongshan, in southern Guangdong province. “I trust the PBOC so I have not been too worried.”

The seasonal shortage of liquidity traditionally seen in June hasn’t been as bad this year, said Zhou Junjie, a senior manager at Agricultural Bank of China in Beijing. “We haven’t seen a big problem with liquidity,” Zhou said.

While the PBOC’s generosity managed to keep borrowing costs from rising to an unbearable level for institutions, it wasn’t enough to stop interest rates spiking on many types of short-term debt in the interbank market, including repurchase agreements, known as repos; the Shanghai Interbank Offered Rate (Shibor), the interest rate banks offer to lend short-term unsecured funds to other banks; and Negotiable Certificates of Deposit (NCDs), short-term bonds issued by banks to other lenders.

“The PBOC handed out money but made the market pay for it,” a senior banking industry analyst told Caixin. “Each injection felt as though you were being literally pricked with a needle — it left a painful memory.”

The one-month Shibor rate jumped to 4.70% on June 19, the highest since April 2015. The rate is usually lower than the one-year Shibor, but such was the demand for short-term money that it rose above the one-year rate of 4.43% and the Loan Prime Rate (LPR), the interest rate that banks offer to their best customers, which was 4.30%.

The benchmark seven-day deposit repo rate jumped to 3.44% on June 20 and 21 and spiked to 4% at one point on June 1, up from an average rate of 2.94% in May. In the primary market, the average interest rate on new issuance of six-month NCDs jumped to 5.14% in mid-June, the highest this year and up from an average of 4.55% in May.

June is normally a difficult month for China’s interbank market — banks and financial institutions have big tax bills to pay, and lenders, who provide most of the liquidity to the interbank market, have mandatory deposits to make at the PBOC. Banks also have to prepare their end-of-quarter accounts and meet a series of conditions set by the central bank under its Macro-Prudential Assessment (MPA), a system to monitor the health of the sector. All of these factors leave the interbank market short of cash and pushes up money-market rates.

Bitter memories of the crisis of June 2013 still haunt traders and financial institutions alike. At the time, a sudden shortage of liquidity saw interbank rates soar to records, with overnight Shibor jumping as high as 30% from around 3% before the crisis started, and the overnight repo rate surging to 25%, triggering panic not only in the domestic market but also across global markets, which feared China’s financial system was in meltdown. At the height of the turmoil, the benchmark seven-day repo rate more than tripled in just one day — rising to 11.62% on June 20, 2013, from 8.26% the previous day.

The PBOC has worked hard since then to head off any chance of a repeat performance, and banks have become extremely cautious in the month of June. The market has been more edgy than usual this year because not only have banks been ordered to meet tougher requirements for their MPA, but the financial sector is in the grip of a severe crackdown by regulators on risky activities and high debt levels, which has created additional strains. Banks have become more reluctant to lend to each other, and smaller banks and nonbank financial institutions (NBFI) who want to borrow money are having to pay much-higher interest rates.

The central bank has had to walk a fine line between providing just enough money to stop interest rates from spiking too high while also sending a message that institutions shouldn’t expect tight liquidity conditions to be loosened too far.

“From the numbers, you can see that China’s monetary policy has been a bit tighter this year, which has helped to correct the market’s previously excessive behavior, and adjusted the distortions that existed in debt maturity, costs and returns,” a person close the PBOC told Caixin. When choosing what measures to take to replenish liquidity, the central bank needs to take into account factors as capital flows, exchange-rate fluctuations, and domestic economic fundamentals, he said. “These aren’t providing enough grounds for any relaxation,” he said.

The deleveraging campaign and the central bank’s cautious stance on adding liquidity left lenders and NBFI scrambling to get hold of funds from other institutions in the interbank market.

Small and midsize lenders who don’t have the large deposit base of the major state-owned commercial and joint-stock banks such as Construction Bank of China and China Merchants Bank have over the past few years turned increasingly to the interbank market to raise money, which they lend to customers or use to buy higher-yielding wealth management products.

Their main tools have been NCDs. But the deleveraging campaign and the regulatory crackdown on the risky activities of all financial institutions has curbed both demand and supply, and forced banks who do sell them to pay higher interest rates.

Net issuance of NCDs was a negative 333.3 billion yuan in May, meaning that banks repaid more than they sold, according to Wind, a financial information and data provider. But with pressure rising on many banks to roll over their maturing NCDs, they started to sell more in June.

Net issuance of NCDs has jumped to 362 billion yuan so far in June, but the cost of borrowing has jumped, rising as high as 5.05% on June 12 for AAA-rated notes of one-month maturity, a quarter higher than a month earlier. Wind data show that over the next three months, more than 4.4 trillion yuan of NCDs will come due, which will add even more pressure on the smaller commercial lenders that rely heavily on this source of funding.

With the cost of borrowing via NCD rising, smaller lenders have been forced to scrummage for deposits wherever they can.

“This year it’s been less of a contest than an outright war for deposits,” a banker with a large state-owned lender told Caixin. “The biggest battle has been for fiscal deposits and government money.”

Desperate to bring in large lumps of money, banks have been offering cash inducements, gifts and even jobs to family members of employees who are in charge of finances at state-owned enterprises and government departments, according to the banking regulator, which issued a warning this week to lenders to stop using such tactics.

Lenders have also turned back to their traditional customer base, and the normally uncompetitive market for bank deposits has sprung to life. The average interest rate on six-month fixed-term deposits jumped to 1.676%, more than a quarter higher than the central bank’s benchmark rate of 1.3%, according to data compiled by Rong360.com, a website that provides information on finance and investment products. Some bankers told Caixin that they were offering savings rates 40% higher than benchmark interest rates to attract deposits.

Employees at several lenders said that targets for bringing in deposits were now more important than business lines such as sales of wealth management products.

“Our bank is holding meetings every day to stress the importance of getting deposits,” said an employee of one large commercial lender. Each branch is required to submit daily reports on new deposits into a chat group on the manager’s cellphone to make it easier for senior bank executives to monitor changes, he said.

An employee at a small commercial bank said customers were being offered gifts and other promotions to deposit money into fixed-term savings accounts. “Our headquarters has also been organizing competitions among local branches, with the branches bringing in the most money getting cash prizes,” he said.

Satisfied that it has managed to defuse the market tension, the PBOC has pulled back from providing liquidity over the past week. It has skipped its daily open-market operations for the past five days, which has resulted in a net withdrawal of liquidity totaling 220 billion yuan.

In statements this week about open-market operations, the central bank said that liquidity in the banking system was at a “relatively high level” as higher fiscal spending toward the end of June was offsetting maturing reverse repos, suggesting that its generosity earlier in the month won’t be continued.

Money-market rates have remained relatively stable, with the seven-day repo rate average edging down to around 2.8%, although there have been intraday spikes to as high as 3.7%. The average daily rate for June, at 3.09%, was only 10 basis points higher than April’s average of 2.99%.

With the June jitters over, institutions are bracing for a return to tightening mode in July and a resumption of the deleveraging campaign.

“Financial institutions are facing mounting pressure as they have huge amounts of debt due for repayment and the central bank is likely to further drain liquidity in the coming days,” said Qin Han, chief fixed-income analyst with Guotai Junan Securities Co. Ltd. “Regulators will continue their campaign to cut excess financial leverage, so the market is still likely to face tightened liquidity conditions after June.”