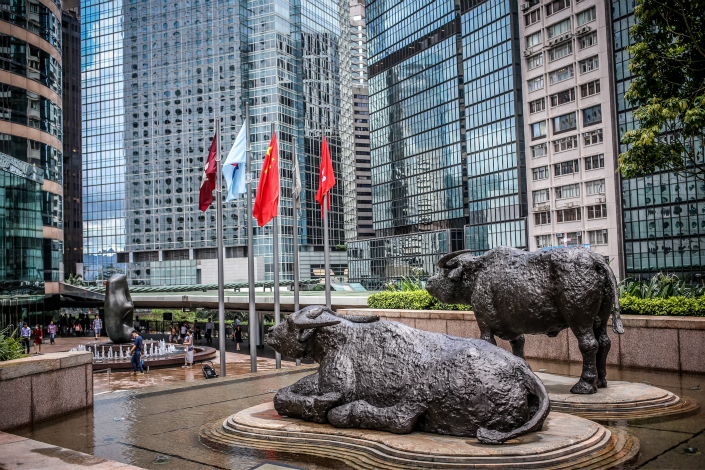 Bond Connect, which officially kicked off on Monday, allows offshore investors to trade and settle Chinese-mainland interbank bonds through a Hong Kong-based custodian and clearing service modeled after Stock Connect. Above, the Hong Kong Exchanges and Clearing Ltd. offices are seen in Hong Kong on June 25. Photo: Visual China

(Beijing) – A new bond-trading link between the Chinese mainland and Hong Kong got off to a smooth yet slow start.

Bond Connect, as the link is formally called, initially is enabling offshore investors to trade onshore Chinese interbank bonds via Hong Kong without any onshore account. On its debut Monday, about 7.05 billion yuan ($320 million) worth of bonds, or 142 transactions, changed hands via the link. The volume of the entire Chinese interbank market reached 111.3 trillion yuan Monday, according to Chinese financial information provider Wind.

“We expect Bond Connect to increase inflows to China bonds, but that the impact will initially be limited and growth gradual,” Nomura International said in a research note Monday.

“Until China is included in one of the flagship bond market indexes, the pace of inflows is likely to remain driven more by investor views on factors such as bond valuations, the People’s Bank of China’s (PBOC) monetary policy stance, and the outlook for both the macro economy and (the yuan),” it said.

Modeled on the stock-trading links dubbed Stock Connect, which went live in 2014, Bond Connect allows offshore investors to trade and settle through a Hong Kong-based custodian and clearing service.

For now, Bond Connect allows only offshore investors to dip their toes into China’s $10 trillion interbank bond market, in which 90% of the country’s bonds are traded. The People’s Bank of China (PBOC) did not say when onshore investors will be allowed to trade Hong Kong-listed bonds.

In early March, Bloomberg Barclays Indices added two new hybrid fixed-income indexes that include China yuan bonds, the first major index provider to do so. Citigroup said it would follow suit, saying that it will embed China bonds into its bond market benchmark WGBI-Extended.

“Since Hong Kong’s bond market capitalization and bond investor population are comparatively smaller than those of other global financial centers, the initial incremental ‘inflows’ from HK-based investors will likely be limited,” Liu Wenqi, an analyst at China International Capital Corp., wrote in a research note Monday. Liu added that such mutual access will boost the cross-border capabilities of financial institutions over the longer term.

Ivan Chung, associate managing director at Moody’s, said: “In the next 12 months, we expect that northbound inflows to the onshore bond market will grow gradually. At the same time, there will be more significant growth in northbound flows as we expect more international bond indexes will include or increase allocations in Chinese onshore bonds one year after the implementation of Bond Connect.”

To tap a potentially higher demand from investors, two major Chinese policy banks — China Development Bank and the Agricultural Development Bank of China — are selling bonds to the public for the first time on Monday.