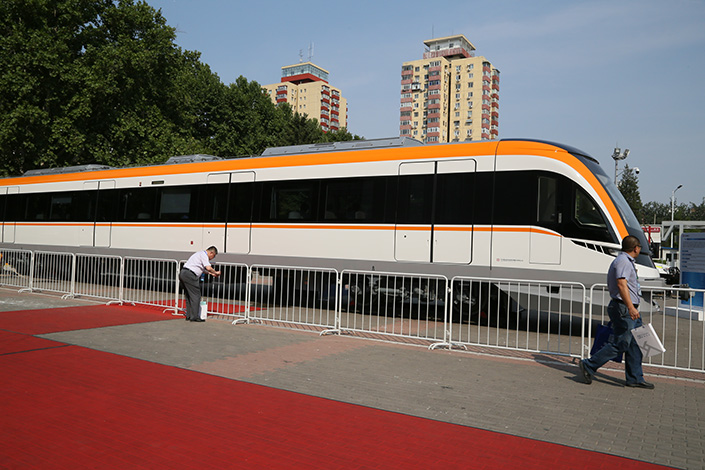 CRRC Corp. said on Tuesday it will participate in a 150 billion yuan fund targeting global projects in a wide range of fast-growing, technology-based emerging sectors. Above, a metro train produced by CRRC is displayed at UrTran 2017, an international rail exhibition in Beijing, on June 19. Photo: IC

Leading Chinese train maker CRRC Corp. said on Tuesday it will participate in a 150 billion yuan ($22.1 billion) fund targeting global projects, as it moves to offset an upcoming slump in domestic demand.

The move follows a forecast that CRRC Corp. Ltd.’s train sales will drop by a third over the next decade, as the frenzy in China’s domestic high-speed railroad construction passes its peak.

The Central Enterprise National Entrepreneurship Guidance Fund, with an initial pledge of 113.9 billion yuan, was set up in May under the direction of the State-Owned Asset Supervision and Administration Commission (SASAC), which oversees state-owned firms. The fund will be dedicated to developing investment projects around the world, the CRRC said.

CRRC’s wholly owned subsidiary, CRRC Capital Management Co. Ltd., will initially provide 90 million yuan before eventually contributing a total of 300 million yuan to the fund, the company said in a filing to the Shanghai Stock Exchange.

The fund is part of a wider effort by Beijing to help emerging industries overcome a bottleneck in growth through enhanced cooperation between state-owned firms, SASAC Chairman Xiao Yaqing said at a launch ceremony in May.

Due to tepid domestic demand for locomotives, CRRC’s revenue and profit dropped 42% and 17% respectively in the first quarter of 2017, marking the third consecutive quarterly profit decline.

The company has been looking to build rail projects for other countries to offset the slowdown at home, and has secured a string of contracts to supply subway cars to U.S. cities that included Boston, New York, and Chicago.

The rolling-stock manufacturer also plans to establish 11 regional branches around the world by 2020, with a target to raise the volume of its overseas orders to $15 billion by then, the company told Caixin last year.