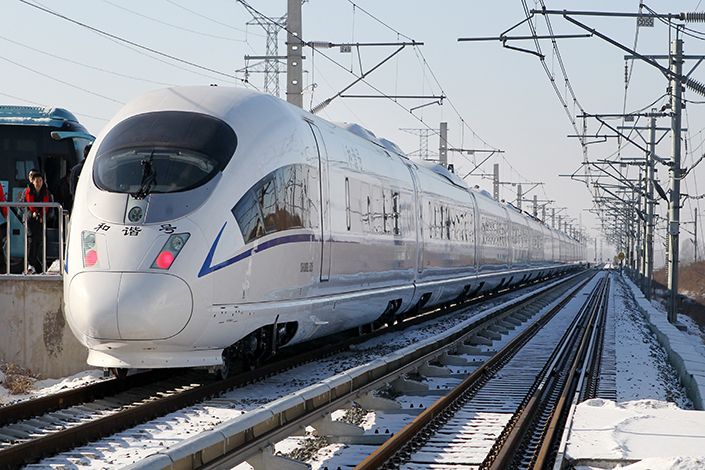 A model CRH380 locomotive is being tested at CRRC's factory in Changchun, Jilin province in December 2015. China’s top train maker saw both its revenue and profit fall by double digits in the first quarter amid tepid domestic demand. Photo: Visual China

(Beijing) — China’s top train maker CRRC Corp. Ltd. said both revenue and profits fell by double digits in the first quarter due to a drop in production amid tepid domestic demand for locomotives.

Shanghai-listed CRRC saw its operating revenue for the first quarter reduce by 17% to 33.6 billion yuan ($4.87 billion) from a year before, while profit slid by 42% to 1.2 billion yuan.

Revenue from train production reduced by 40% in the first quarter, as train output decreased. But, income from subway and other urban transit projects went up by 42%, making it the fastest growing sector for the manufacturer.

This was the third consecutive quarterly profit drop for the company, despite securing several significant train and subway deals recently including ones in the U.S. cities of Philadelphia and Boston.

The company says it expects its train sales to drop by a third over the next decade, as domestic demand starts to subside as a multi-trillion yuan infrastructure building frenzy starts to lose steam.