Village Official Fed Up With Obstacles in Fight Against Poverty 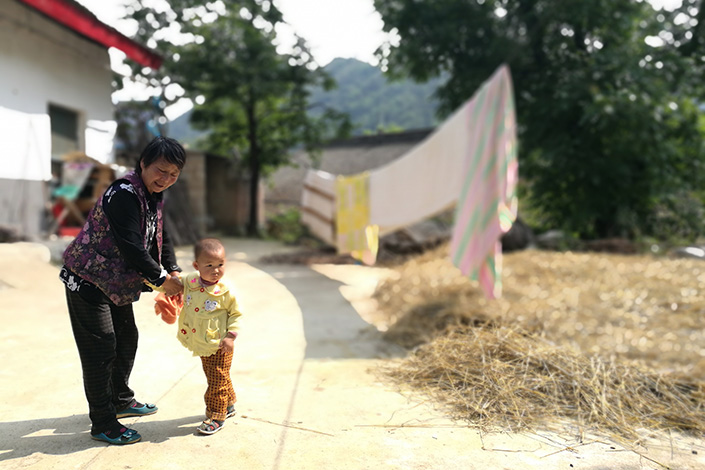 Qin Jie recently quit his position as head of poverty relief in the Qinba area of western China, citing frustration with government red tape and villagers who tried to take advantage of the system. Above, a woman and child are seen in a Qinba village. Photo: Huang Shulun/Caixin

After three years in charge of poverty relief in a remote village in western China, local official Qin Jie has vowed never to do it again.

“I will not do this job next year, never!” he said.

China has taken on an ambitious goal to eradicate poverty by 2020, but Qin’s experience on the front line of the country’s battle against impoverishment bodes poorly for its success.

In a document released in April 2016, the Communist Party of China and the State Council, the country’s cabinet, set a goal to weed out poverty in four years by targeting swaths of the poorest parts of the country.

It was in a small village in Qinba that a Caixin reporter met Qin in mid-June. The official said he was overwhelmed by the demands of the job, which included frequent visits by government inspection teams among other challenges.

“I feel like I’ve just sent off one inspection team leaving in a yellow car when another one arrives in a white van,” he told Caixin.

Qin, in his 40s, said that dealing with red tape of poverty reduction has taken up far too much of his day. Those responsibilities include filling out forms that document relief work at the village and coordinating government funds available to farmers, he said.

China has had success lifting its people out of poverty. In 2016, the number of people living in the country on less than $1 a day fell by 20 percent year-on-year to 43.35 million, according to the State Council’s Leading Group Office on Poverty Alleviation and Development.

Qin’s village, locked in a remote mountainous area vulnerable to soil erosion, has little arable land to farm. Rising costs for children’s schooling and an exodus of young laborers to cities has also taken a toll.

Qin had hoped to use the government poverty relief fund as seed money to plant cash crops or develop small businesses, he said. However, many locals were more interested in how much relief money and goods like cooking oil they could get as handouts.

“There was even a competition among the local villagers to get on the government dole,” Qin said.

Some of the families agreed to take the government relief money to grow herbs, but then left the village to work in the city once they got the money, Qin said. And there was nothing he could do about it.

Qin said that he has tried to express his frustration at a meeting with officials from higher up in the government. “But before I got the chance to speak, the two-hour meeting was filled with praise from the officials about how I had done a good job, and other empty words,” he said.