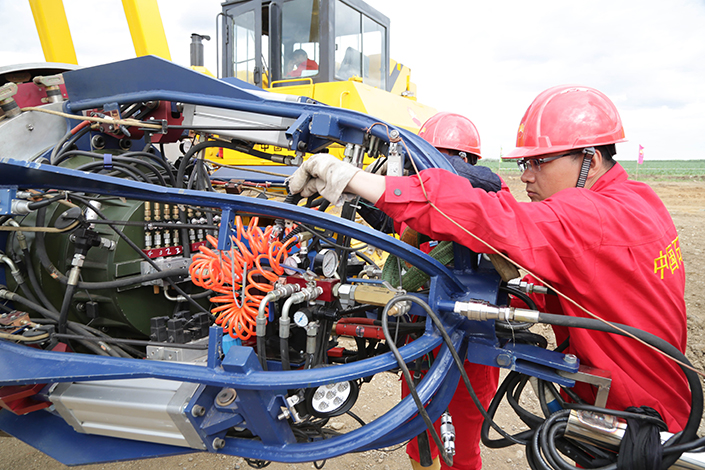 (Beijing) — The $400-billion Sino-Russian natural gas pipeline will start deliveries in December 2019, at least a year later than it was originally scheduled to begin operating.

The delay comes at a time when Russia is seeking to increase its gas exports to East Asia to decrease its dependence on demand from Europe amid geopolitical tensions.

Neither CNPC nor Gazprom immediately replied to Caixin’s questions about the delay.

In 2014, the two companies signed a framework agreement that laid out the schedule for Russian natural gas deliveries.

The pipeline, named Power of Siberia, will originate from the Kovyktinskoye and Chayandinskoye gas fields in eastern Siberia and enter China at the northeastern city of Heihe, Heilongjiang province. From there, the gas will be transported to Beijing and Shanghai.

In China, CNPC will add 3,405 kilometers (2,116 miles) of new pipeline for the project, which will make use of 1,740 kilometers of existing pipeline, according to CNPC.

Despite the delayed start of deliveries, Gazprom said the project is proceeding as planned.

“Our work is strictly on schedule, even ahead of schedule, regarding the Power of Siberia,” said Alexey Miller, chairman of the Gazprom Management Committee. “Russian gas supplies to China will come right on time.”

Russia was the world’s top gas producer until 2009, when it was overtaken by the United States, according to the BP Statistical Review of World Energy.

The shift had immense implications for the global natural gas market. By 2006, the U.S. had developed low-cost technologies to exploit the large shale gas resources within its borders, allowing it rely less on imported natural gas.

The change left the U.S.’s former suppliers in the Middle East and West Africa looking for replacement customers. They found Europe, which was eager to diversify its own supply of natural gas away from Russia, its largest supplier at the point.

In the end, Russia lost influence in the global natural gas market. In 2006, the country produced 20.7% of the world’s natural gas, according to the BP Statistical Review of World Energy. Ten years later, it produced 16.7% of the fossil fuel worldwide.

Russia has also run into other problems with its neighbors that have made it harder to sell its natural gas. Countries including Ukraine, Belarus and Poland have raised the fees they charge Russia for piping its natural gas through their territory. They have also been agitating for Russia to cut natural gas prices. The crisis in Ukraine only further complicated the relationship between Russia and Europe.

Tensions with Europe pushed Russia to focus its efforts on selling gas to East Asia. In 2010, Russia’s Ministry of Energy released its plan to boost natural gas exports to the Asia-Pacific market, especially China, Japan and South Korea. Its goal was for the Asia-Pacific market to account for 20 percent of its total natural gas exports by 2030, up from nothing in 2010.

Russia’s shift to East Asia dovetails with China’s own goals. For one thing, China needs to replace coal with natural gas to fight its ongoing air pollution problems. For another, Russia occupies a key position on China’s Belt and Road roadmap.

Tuesday’s agreement was signed in the presence of Chinese President Xi Jinping and Russian President Vladimir Putin. On Wednesday, Xi completed a two-day visit to Russia, where the two sides agreed to invest 74 billion yuan ($10.9 billion) in two funds for cross-border projects and technology startups.

In 2014, the two countries also agreed to work together on another gas pipeline that was supposed to run through western China’s Xinjiang Uygur Autonomous Region – but details of the project have yet to be finalized.