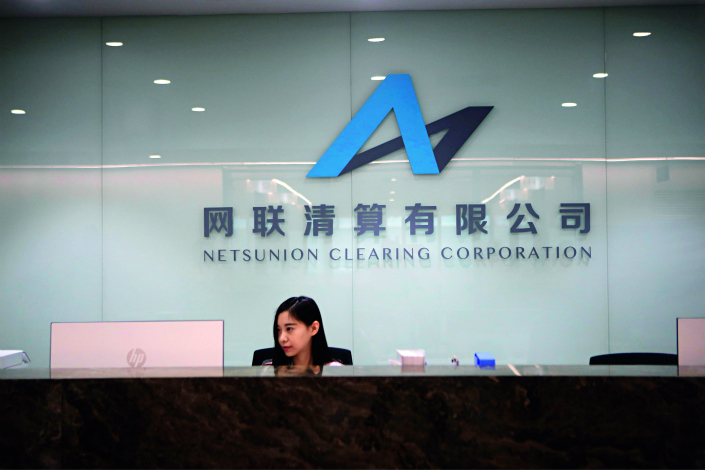 The new clearinghouse for China’s 54 trillion yuan ($7.9 trillion) third-party payment market — known as the Online Settlement Platform for Non-Bank Payment Institutions — will subject all of the country’s 200 or more payment companies to the same set of rules. Photo: Chen Weixi/Caixin

(Beijing) — When China’s central bank last August unveiled a plan to create a new platform to clear transactions from all the country’s online payment gateways, many doubted whether the project would see the light of day.

The new nexus for China’s 54 trillion yuan ($7.9 trillion) third-party payment market will combine all of the country’s 200 or more payment companies under a standard set of clearing protocols and rules, ending the long-standing practice that transactions from different companies are handled under different terms with banks, falling outside the central bank’s oversight.

Many stakeholders initially questioned the plan since it required a massive effort in terms of technology and development, while bringing with it profound changes to the online payments market and sparking a reshuffle in the relationship between payment firms, banks and other market players, such as UnionPay, the country’s only interbank payment clearinghouse.

But the new clearinghouse is taking shape at a faster pace than many expected. On June 30, the platform, formally known as the Online Settlement Platform for Non-Bank Payment Institutions, started clearing transactions from Tencent Holdings’ Tenpay, which operates the payment service for the popular messaging app WeChat, marking a key step toward its official inauguration after a three-month trial run began in late March.

Alipay, the largest payment provider, said it was “actively preparing” to migrate its transactions to the new clearing platform as per the central bank’s requirements, without giving a timetable.

By June 30, 122 commercial banks including Bank of China, China Construction Bank and Industrial and Commercial Bank of China had connected with the new clearing system. All together, the banks account for over 70% of the banking industry in terms of accounts.

By the second half of 2018, the new clearing platform will be connected with 115 licensed payment service providers and 300 commercial banks, while linking with the central bank’s clearing system to facilitate payment transactions between consumers and merchants.

China’s online payment market is undoubtedly the world’s largest. In 2016, online transactions handled by nonbanking institutions totaled 54.3 trillion yuan, including 51 trillion yuan through mobile devices, an increase of more than 120% from the previous year, according to the National Institution for Finance and Development.

Over 200 companies have been licensed for this business, but the market has been dominated by several major players, with the nine largest firms accounting for over 96% of the market share, including about 40% handled by Alipay and 20% by Tenpay, according to internet business data provider iResearch.

Unlike offline payments, such as those made at point-of-sale machines in shopping malls, which are mostly handled by the clearing system of the state-backed bank card association China UnionPay, the majority of payments made online through third-party payment providers are processed separately according to different terms in the payment firm’s own agreement with banks. This makes it hard for banks to maintain consistent standards and control risks, posing a challenge to regulatory oversight.

Also, before transactions are cleared, the funds that will be transferred to the receiver sit in the bank account of the payment service provider, raising concerns that they could be used for unintended purposes.

The creation of the online payment clearinghouse is a key step for the central bank toward unifying payment transaction standards and placing this vast market under closer scrutiny. But making changes in such an established market has not been easy.

There was much debate concerning the technology roadmap and ownership structure of the new clearinghouse, with many smaller players worrying that the dominance of Alipay and Tenpay may allow the pair to influence or control the operations of the platform, leaving other players at a disadvantage.

“If construction of the online payment clearinghouse had started five years ago, it wouldn’t have been as difficult as it is now,” said a source close to the matter.

The central bank eventually decided to grant broader access to payment companies to take part in the investment and development of the clearing system, a key reason that the platform’s construction took just six months to complete from its initial design stage to testing — much faster than the development of other existing clearing systems, said Dong Junfeng, director of the clearinghouse’s preparation team.

“The most difficult part was coordination” as payment companies had very different attitudes about the clearinghouse, Dong said.

With an initial capital investment of 2 billion yuan, the clearing platform is 37% owned by the central bank and its subsidiaries, including the Payment and Clearing Association of China. Another 38 online service providers hold the remaining 63% stake, in which the biggest players Tenpay and Alipay each hold a 10% share.

Payment firms also jointly contributed expertise and technology. Most of the 200-member team behind the preparation and development of the clearinghouse were experts and engineers from different payment companies and institutions. Twelve payment companies provided more than 20 patented technologies to the new platform.

The clearinghouse adopted a multicentered structure to ensure security, with six data centers located in Beijing, Shanghai and Shenzhen. “If technical errors occur at one center, it can switch to another center within seconds,” a central bank official said.

As the clearinghouse goes live, its broader impact is beginning to unfold. Dong said a key mission of the platform is to create a level playing field for all payment players to follow the same standards and rules. It will also save on operating costs and reduce management risks for payment companies and banks as they will no longer need to set up multiple transaction arrangements with different partners.

The relationship between the new clearing platform and China UnionPay was also an issue of great concern. Established in 2002 with investments from over 100 banks, UnionPay is the world’s third largest bank card clearinghouse after Visa and MasterCard.

UnionPay charges banks and other companies a fee for using its network. A central bank official told Caixin earlier that the new clearinghouse will also charge payment companies a fee for its services, but those fees won’t be higher than current costs. Customers will not be affected, the official said.

“The new clearinghouse and UnionPay are targeting different areas. Good coordination will benefit both parties,” a UnionPay source said.

Going forward, the clearinghouse will play a role in enhancing the protection of customers’ privacy, push forward unified custody of consumers’ funds and support payment companies to expand their services overseas, Dong said.