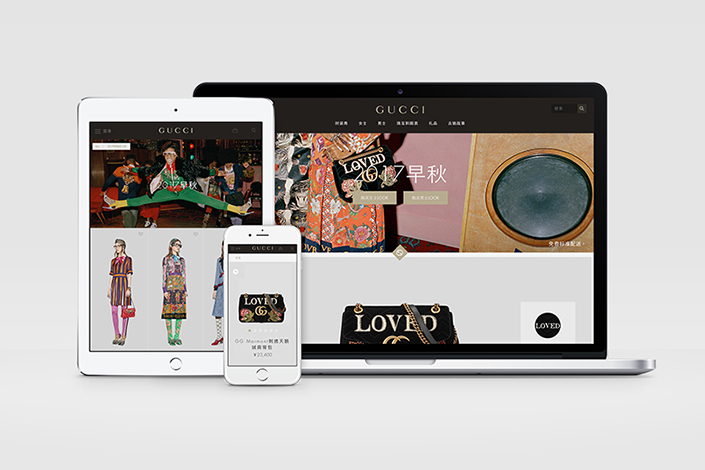 Gucci's new online store will cater to the many Chinese customers who don't live in one of the country's largest cities. Photo: Gucci

(Beijing) —Smaller-city fans of luxury goods will no longer have to travel long distances to buy the latest Gucci handbag, now that the Italian brand has developed an online store that caters to the Chinese market.

The store, which offers full collections of handbags, shoes, jewelry and ready-to-wear apparel, allows Chinese customers to shop “without the restrictions of store locations or business opening hours,” the company said in a statement.

The move will help balance the mismatch between the location of Gucci’s physical stores and their target consumers. According to consultancy McKinsey & Co., 80% of luxury stores are located in the 15 Chinese cities with the largest gross domestic products, while only 25% of buyers reside there. Two-thirds of luxury purchases made by Chinese people actually take place outside the country.

While some luxury brands have been reluctant to go digital in an attempt to maintain exclusivity, Gucci was an early pioneer of e-commerce services and has been aware of the benefits of online shopping services for years.

It launched its inaugural e-commerce site in the U.S. in 2002, and it now is available online in 29 countries across Europe, North America and the Middle East. Gucci’s online presence has been undergoing an overhaul since 2015 under the influence of creative director Alessandro Michele and CEO Marco Bizzari, with the revamp of the company’s e-commerce site last year and the launch of several social media campaigns such as artist collaborations on Instagram and behind-the-scenes content on Snapchat.

Gucci’s revenue in the first quarter surged a record 51% to 1.35 billion euros ($1.54 billion), with online sales rising 86%, driven by online sales in North America and Western Europe, where their e-commerce stores were first launched.

Gucci’s expansion into China is timely, as the company is entering a market where online shopping is rapidly becoming a way of life. Although online retail sales only accounted for 17% of the total retail revenue in China during the first five months of the year, online sales rose 32.5% to 2.46 trillion yuan ($361 billion) in the same period, much faster than the 10.3% growth seen in online and offline retail sales combined, National Bureau of Statistics data showed.