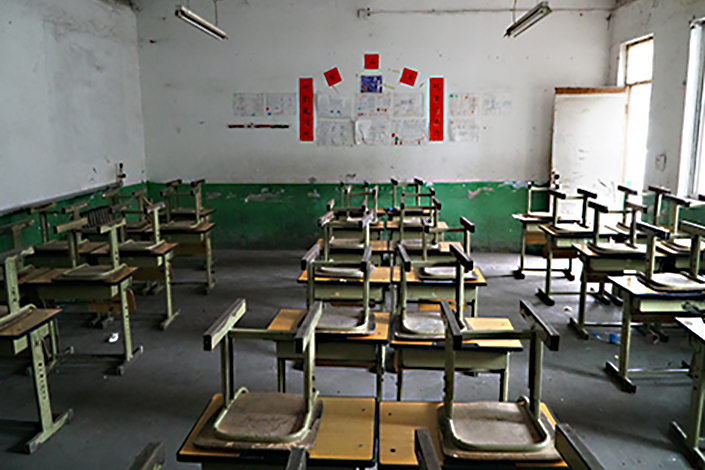 In Beijing's Changping district, many schools that are open to migrant children are being forced to move as the municipality slates the illegal structures for demolition. Some school officials still do not know where their schools will move to, or even if they will be open at all. Photo: Huang Ziyi/Caixin

(Beijing) — Thousands of children from rural migrant families may be in education limbo after the summer holidays as their schools face imminent closure amid a government crackdown on slums in Beijing’s Changping district.

Zhiquan school in the village of Dongsanqi, which has classes from grades one through six, has been earmarked for demolition at the end of July, said Qin Jijie, the school’s principal. The cleanup that affects hundreds of villages on the fringes is part of a plan to increase the forest cover surrounding the city, according to Beijing municipal authorities.

But authorities have been closing schools catering to poor migrant families since 2014 after they announced plans to rein in the city’s population growth.

The school, with over 500 students, is frantically searching for another site before the new school year starts at the end of August, Qin said. If they are unable to secure a location, they may have to close the school, he added.

Another primary school with a similar number of students administered by Qin in the nearby town of Cuizhen, also in Changping district, faced a similar fate.

Dongsanqi village, about 20 kilometers (12.4 miles) northwest of downtown Beijing, is home to 50,000 rural farmers who have migrated to the Chinese capital in search of work. These construction workers, street vendors and scrap dealers are often unable to secure the required documents such as a work permit and tax slips that would allow out-of-town workers to send their children to public schools. Therefore, schools like the one run by Qin are their only alternative.

Although Qin had obtained a license to operate a school, Changping authorities said they were demolishing it because it was run in an illegal building. The site was constructed by locals years ago without the necessary building permits. Many schools catering to migrant children operate in similar premises as they don’t receive government subsidies and can’t afford to rent other places.

It isn’t clear how many schools are affected in the latest clampdown, but four schools Caixin visited in Changping district face closure by the end of July.

The demolition of hundreds of villages, including Dongsanqi, is the latest attempt by authorities to rein in population growth and to “remove unnecessary functions” from the Chinese capital as the city has been plagued by air pollution and traffic congestion.

In a draft urban plan released in late March, the municipal government in Beijing said it wanted to cap the city’s population, including migrant workers who stay in the capital for at least six months, at 23 million in 2020. At the end of 2016, the city already had 21.73 million people.

Past efforts, starting in 2014, led to the closure of hundreds of wholesale and retail markets where rural migrants were employed en masse. It had also targeted schools catering to children from these families.

As a result, thousands of farmers-turned-migrant laborers have been pushed out of the Chinese capital altogether or further into Beijing’s fringes.

Qin said his school has survived several crackdowns in the past, but had to relocate twice, first from the downtown district of Chaoyang to the periphery, and then again to another village in rural Changping district since 2014.

“Everything had been smooth in the first couple of years since we opened the school,” Qin said. “But the forced relocations have made it harder for us to operate, and we lost nearly two-thirds of the students when we first moved in 2014.”

The Zhenxing School in Yandan village, also a licensed school for migrant students in Changping district, had its water and electricity cut off by authorities in early April in an attempt to coerce them to wind down operations, according to its principal, Wang Zhenguo.

The school of 700 students managed to remain open in the past semester until the end of June by relying on its own power generators and bottled water, Wang said.

They have also found another venue in the same village for a new school, but township authorities ordered the principal to stop work at the second, citing building-license violations.

“Where will our students go in the next school year?” Wang asked.