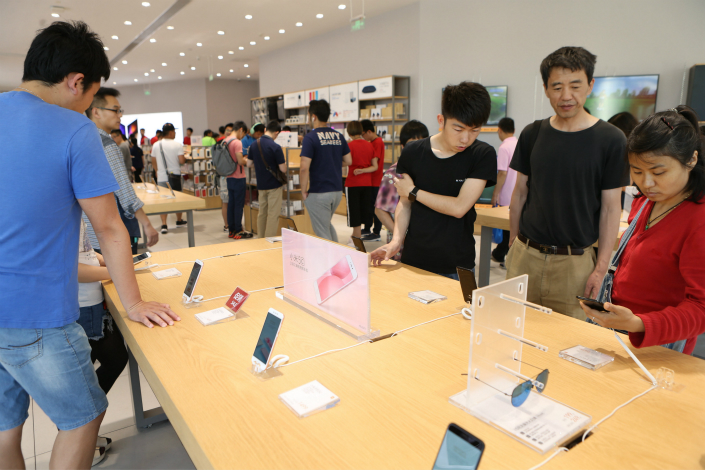 Xiaomi Inc. says its second-quarter sales jump resulted in part from integrating traditional brick-and mortar stores into its business model. Above, consumers shop at a Xiaomi store in Shanghai on May 28. Photo: IC

(Beijing) — Chinese electronics maker Xiaomi Inc. has once again embarked on a trajectory of rapid growth after a two-year business overhaul amid weak smartphone sales.

“To date, no other smartphone company globally has been able to resume growth after a decline in sales,” Lei said in an internal letter to employees dated July 7.

With strong growth in its early days, 7-year-old Xiaomi was once the world’s most valuable startup — valued at $45 billion at the end of 2014. But its core smartphone sales stalled thereafter.

Lei said 2016 was “a year of setbacks,” and was “the most challenging” period in Xiaomi’s history.

But the weak performance turned around in early 2017. It reported impressive growth for the first quarter by shipping 14.7 million smartphones, representing a 25.5% year-on-year increase.

The recovery is the result of a two-year internal recalibration, which revised several components of the company’s business model, Lei said.

Xiaomi identified innovation as a priority, and decided to develop its own chipset. It unveiled its first self-developed chip in February, becoming the fourth smartphone maker in the world capable of making such chips, after Apple Inc., Samsung Group and Huawei Technologies Co. Ltd.

Also contributing to the sales jump was the company’s readjusted retail sales strategy. To reach more consumers, it shifted from an online-only sales model to one that integrated internet ordering with traditional brick-and mortar stores.

As of Friday, Xiaomi has opened 123 Mi Home stores across China, Lei said. The company announced a plan in February to open 1,000 stores over the next three years.

The company’s three years of investment in foreign markets also benefited its sales. Lei noted there was “explosive growth” in its global business. In its second largest market, India, revenue surged 328% year-on-year in the first half of the year, making Xiaomi the second largest brand in the Indian smartphone market.