By Lin Jinbing and Leng Cheng 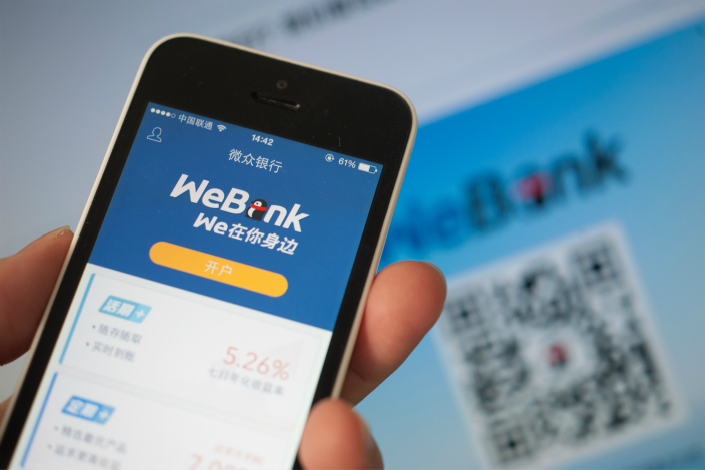 Online microlender WeBank said Tuesday it earned a net profit of 40.1 million yuan in 2016, coming off a loss of 584 million yuan in its first few months of operation the previous year. Photo: Visual China

(Shenzhen) – WeBank, the major Chinese online lender owned by Tencent Holdings, posted its first annual net profit in its second year of operation, thanks to surging demand for microloans among blue-collar workers and small entrepreneurs.

China started granting online lending licenses to nonbanks in 2015 as the country wanted to channel even more money into the financial sector. Consultancy iResearch has predicted that online loans will rise to almost 60% of the nations’ gross domestic product by 2020, up from 33.7% at the end of 2016.

Weilidai, WeBank’s microloan product, had lent out a total 360 billion yuan as of May 15, when the online lender celebrated its second anniversary. That was nine times more than its outstanding loan total of 40 billion yuan a year earlier.

Apart from strong demand for microloans, which in China are generally between 1,000 yuan and 200,000 yuan and do not require collateral or a guarantee, WeBank also has access to 938 million monthly active users on WeChat, the messaging app also owned by Tencent.

Over the past two years, the average size of a WeBank loan was 8,200 yuan, Huang said.