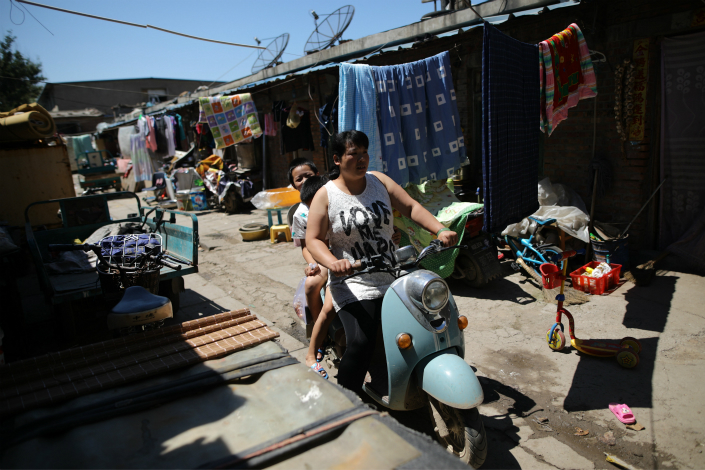 Qiuxian village in Beijing’s Daxing district has ordered migrant workers living there to pay a fee of 2,000 yuan a month, but some experts question the legality of the measure. Above, Beijing's rural Changping district also has targeted migrants in an effort to reduce the population, with authorities closing schools for the workers' children. Photo: IC

(Beijing) — Authorities in a rural village in Beijing say they plan to charge 2,000 yuan ($295) per month to out-of-town workers living in the area beginning next month.

It is the latest in a raft of measures aimed at reducing the influx of migrants into the Chinese capital, but analysts have called the move illegal.

Migrant workers from other provincial-level areas who rent a home in Qiuxian village in Beijing’s Daxing district will be required to pay this special fee, which could be nearly four times their monthly rent, to the village committee, according to a government notice that has been circulated widely on the internet in recent days.

“The decision aims to fulfill the target of having zero migrants in our village,” the flyer said.

The authenticity of the document was verified by He Zongfu, head of Qiuxian’s village committee, after an inquiry from Caixin.

Those who fail to comply with the order will be denied access to certain services and told to leave the village, the flyer said.

However, some legal experts questioned the legality of the village’s action.

Village committees in China are composed of a group of representatives elected by residents and who operate under the guidance of the lowest level of government. This self-governing body can impose fees only on residents with a local household registration document, and not migrants, said Qin Xiaojian, an associate professor at Zhongnan University of Economics and Law. It is also against the law to force migrants out of the area via such levies, he added.

“Any levies could be collected only in accordance with legal documents under the civil code such as lease agreements or housing contracts,” he said.

In addition, migrants who operate shops or restaurants in the village will be required to pay the village authority an additional 5,000 yuan a year, according to the flyer.

The fees will be collected from both individuals and businesses to cover expenses linked to public sanitation, providing tap water, public security and electricity, according to He of the village committee.

However, these new fees aren’t justified because many of these services are already been provided by the government using money collected from taxpayers, including migrant workers, said Ye Jingzhong, dean of China Agricultural University’s College of Humanities and Development Studies.

The Chinese capital planned to cap its population at 23 million at the end 2020. The city is already home to 21.7 million people.

Authorities in Beijing have in recent years ordered the closure of hundreds of retail and wholesale markets where migrant workers are employed en masse, and also forced the shuttering of schools for children from migrant families. These actions have forced laborers to leave or move further into the outskirts of the city.

In a statement issued via the microblog belonging to Daxing district government on Sunday, the village committee explained that it adopted such a drastic measure because an influx of migrant laborers has led to “the deterioration of public sanitation and public security” in the village.

But the 100 or so out-of-town migrants living in the village account for only 10% of the village’s population, said He.