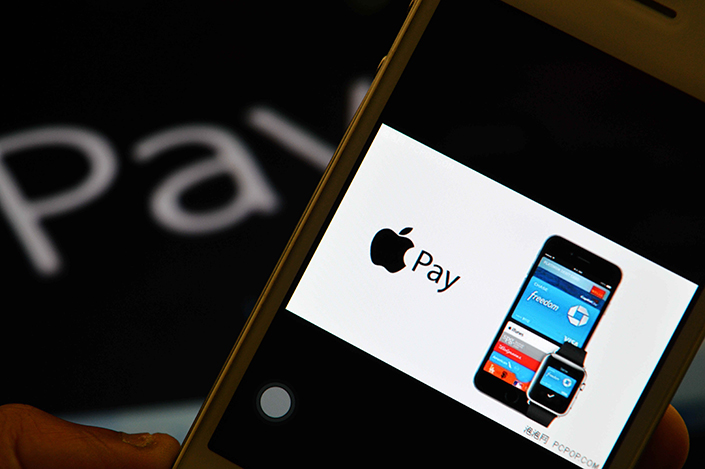 Apple is seeking to chip away at the duopoly held by Tencent and Alibaba in an online-transaction market worth 35 trillion yuan. Photo: IC

The world’s largest technology company is stepping up to compete in a field dominated by Chinese competitors — mobile payments.

Apple Inc. launched a full-blown promotional campaign in China this week, offering up to 50% discounts when customers choose to pay with the company’s Apple Pay service, in a bid to take a bite out of the world’s largest mobile-payment market.

Apple’s digital-payment unit is hoping to sink its teeth deeper into the juicy 35 trillion yuan ($5.2 trillion) online-transaction market in China — one ruled by tech giants Tencent Holdings Ltd. and Alibaba Group Holding Ltd.— over a year after an unremarkable debut.

Apple Pay users will receive discounts this week when they swipe their iPhones over a contactless terminal at 40 franchises, including brick-and-mortar retail shops such as 7-Eleven, Starbucks, Carrefour and Gap, as well as at online outlets.

“Our goal is for all Apple users to use Apple Pay,” Jennifer Baily, vice president of Apple Pay, told Caixin on Monday.

Apple was a latecomer to the advanced online payment scene in China. It didn’t launch its service in the country until February 2016, a time when people in China were using digital wallets to pay for 6 trillion yuan in goods and services in a single quarter.

The bulk of those payments were made through China’s two online-payment heavyweights: Tenpay, a platform embedded in tech giant Tencent’s 900-million-user app WeChat, and Alibaba’s Alipay, which handles over 70% of online shopping transactions in the nation and now accommodates payments for takeout, utilities and ride-hailing.

The companies have won users in part by showering them with intermittent discounts and hefty promotional events — sometimes slashing prices in half at bakeries, fashion chains and grocery stores.

The giants have left little room for the smaller players. Combined, Tenpay and Alipay handle 92% of the mobile-payment transactions in China, according to first-quarter figures from consulting firm Analysys.

The remainder of the market is divided among bit players, who have slim hope of carving out a larger slice of the pie. Even Baidu Wallet, which has been pushing its payment service by offering deals on its popular takeout-delivery arm, sits with a meager 0.3% market share.

Apple Pay is currently not among the top eight of China’s online-payment companies by transaction volume, Analysys numbers indicate.

While Apple has an estimated 130 million iPhone users in China to tap into — based on China Internet Network Information numbers — Tenpay and Alipay are targeting all 780 million smartphone users in the country, on both Android and Apple devices.

Although Apple Pay still rounded up over 38 million fans in the first 12 hours of its 2016 debut, the platform has been slow to gain traction in China. Its touch-and-go approach, albeit convenient for users, requires equipment that many smaller shops find expensive to adopt.

Acceptance of digital payment at physical retailers and mom-and-pop shops has proliferated over the past year, driving the volume of mobile payments to more than three times its size a year ago — reaching nearly 19 trillion yuan in the first quarter this year alone, Analysys research shows.

In China’s major cities, it is now hard to find a business — from street food stands to real estate agents – that does not accept some form of mobile payment.

Alipay has even been mailing free QR codes to users, in hope that the recipient happens to be a neighborhood tailor or scooter driver who will offer the scannable code to his or her customers.