Bullet Trains Set to Get Speedier 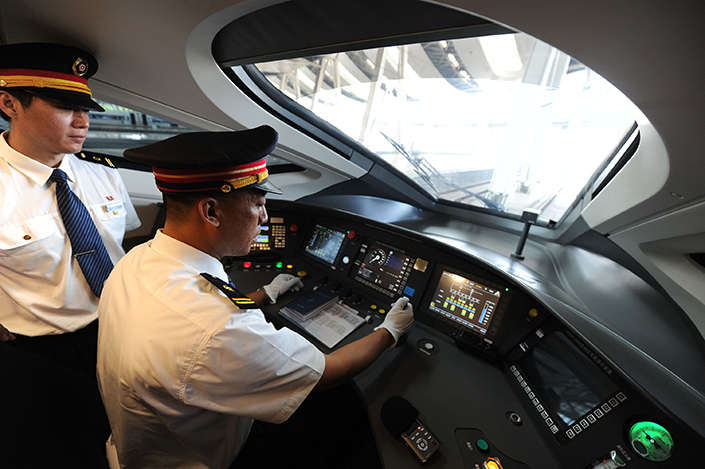 Train operators sit inside China's new high-speed train, named "Fuxing," in Beijing, on June 26. China plans to raise the top cruising speed of its bullet trains to 350 kph from 300 kph on some lines. Photo: IC

China plans to raise the top cruising speed of its bullet trains to 350 kph (217 mph) from 300 kph, Caixin has learned, six years after it slowed down the newly developed trains over safety concerns.

The speed increase will go into effect around the National Day holiday on Oct. 1. It will start on one of the busiest lines – the 1,318-kilometer Beijing-Shanghai route. The shortest travel time on that line is currently about 4 hours and 50 minutes.

China Railway Corp. (CRC) has finished the assessment of the speed-change plan, and has been fine-tuning equipment along the line in preparation for the launch, multiple sources told Caixin.

When ready, passengers will spend only about four hours traveling between the two metropolitan cities, sources close to CRC said.

Rail authorities have been enforcing stricter safety measures to ensure smooth operations since two high-speed trains crashed in the eastern city of Wenzhou on July 23, 2011, killing 40 people and injuring more than 170.

“In terms of technology and safety, China’s bullet trains have no problem running at 350 kilometers per hour,” He Huawu, chief engineer with CRC told Caixin in June last year. He added that thorough assessment was still needed for the cost of operations and maintenance.

A person with China Railway Signal & Communication Corp. Ltd. (CRSC) told Caixin on Tuesday that the final work on the Beijing-Shanghai high-speed rail involves the testing of tracks, trains and signals, and that CRSC is in charge of ensuring the signals work smoothly.

The communication signal fine-tuning will be demanding, as the signal system along the Beijing-Shanghai rail has never been tested for speeds of 350 kph, since it came into service on June 30, 2011, the source told Caixin.

The Beijing-Shanghai high-speed rail was launched shortly before China decided in July 2011 to slow down all high-speed trains that had previously run as fast as 350 kph.

Starting from the late 1990s, China raised its train speeds over a decade-long period from an average of about 50 kph to a maximum of 350 kph, when it launched the first high-speed rail of more than 100 kilometers in length between Beijing and Tianjin in 2008. More rail lines that ran bullet trains were built after that.

However, after former railway minister Liu Zhijun was put under investigation for corruption in February 2011, the new minister Sheng Guangzu decided to tamp down Liu’s ambitious drive for speed. Instead, he emphasized the safety of high-speed trains. Since July 1, 2011, all trains that could run at up to 350 kph were limited to 300 kph, except the Beijing-Tianjin line, which was also slowed a month later.

After a few years, the call for the resumption of higher speed returned. On June 3, 2016, when President Xi Jinping inspected an exhibit featuring China’s technological accomplishments during the 12th Five-Year Plan period (2011-2015), he reportedly asked whether conditions were ready to resume the 350 kph speed for trains.