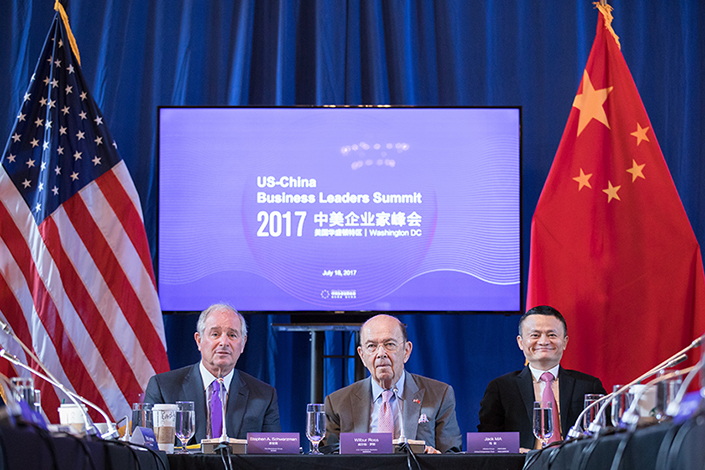 A new group chaired by two of the world’s richest and most influential businessmen called at its inaugural meeting for greater transparency and dialogue between the U.S. and China, seeking to smooth and even boost trade ties between the world’s two largest economies.

The inaugural U.S.-China Business Leaders Summit ended its first meeting in Washington with a call “to create a more equitable and balanced bilateral and global economic environment.”

That call came after a 2016 U.S. presidential campaign that saw then-candidate Donald Trump frequently accuse China of stealing U.S. jobs, manipulating its currency, and failing to give reciprocal access to its markets for U.S. products. That led many to fear that Trump would launch a campaign of protectionist policies in his pledge to put “America first.”

Since Trump’s election, relations have improved somewhat after a friendly summit in April between the new U.S. president and his Chinese counterpart, Xi Jinping, in Florida.

The Business Leaders Summit appeared to address some of Trump’s grievances by saying it was committed “to increasing bilateral trade, including the export of agricultural products, liquefied natural gas, and high-quality consumer products from the U.S. to China, taking advantage of China's economic transition.”

“Having an open, transparent, predictable and business-friendly environment is a key foundation to fostering private-sector investment and job creation,” the group said in the statement after its first meeting. “In that regard, we call on political leaders in the United States and China to strengthen cooperation and dialogues on regulation and supervision, standards, protection of intellectual property rights, free, fair and open market access and to eliminate procedures and practices that act as a hindrance to economic growth and job creation.”

The forum said it plans to hold an annual dialogue. The first meeting was chaired by Jack Ma, founder of e-commerce leader Alibaba Group Holding Ltd., and Stephen Schwarzman, co-founder of asset management giant Blackstone Group. Ma is the world’s 18th richest man, with a fortune estimated at $35.5 billion; Schwarzman is the 112th richest, with a fortune of $11.8 billion, according to Forbes.

Ma previously scored a big victory when he became the first major Chinese business leader to meet with Trump after Trump’s election in November. During that meeting in January, Ma pledged to create 1 million U.S. jobs by promoting American companies in his online malls.

The new group’s other members are some of the most influential business leaders from both countries, including the CEOs of U.S. corporate giants JPMorgan Chase & Co., Caterpillar Inc., Wal-Mart Stores Inc., General Motors Co., IBM Corp. and General Electric. On the Chinese side it includes chairmen and CEOs from Bank of China, retail giant Suning Holding Group Co. Ltd., and state-run grains giant COFCO.

The group also emphasized that while frictions will occur, they should be resolved through dialogue rather than trade wars.

“While respecting the use of traditional trade remedies, we hope that trade disputes can be resolved through effective negotiation with both sides working for prompt resolution,” it said.