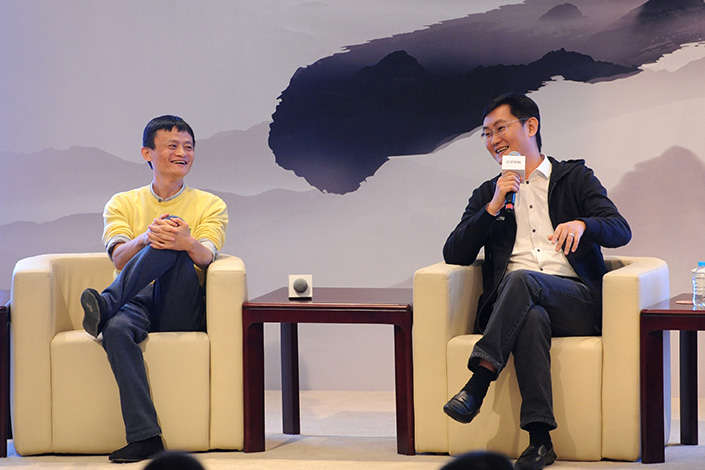 Alibaba Group Holding Ltd. and Tencent Holdings Ltd. are new additions to the Fortune Global 500, a list of the world's companies with the highest revenues. Above, Alibaba CEO Jack Ma (left) talks with Tencent CEO Pony Ma at the Internet Financial Industry Forum in Shanghai in November 2013. Photo: IC

(Beijing) — A record number of Chinese companies has made it onto the latest Fortune Global 500 list, with tech leaders Alibaba and Tencent joining for the first time China’s traditional energy and banking giants.

A total of 115 Chinese firms made the cut — 10 more than a year before — putting China second behind the United States, which had 132 companies on the list, two fewer than it did last year.

Japan saw 51 of its firms among the Global 500, which was published Thursday and which Fortune compiles based on the companies’ annual revenues.

A statement on Fortune’s official Chinese website noted that “the majority of Japan’s giants are those from innovative industries, with 10 electronics and telecom companies and 10 automakers, while China — excluding finance — had most companies from energy, mining and property developers.”

The inclusion of China’s top e-commerce company Alibaba Group Holding Ltd., at No. 462, and internet giant Tencent Holdings, at No. 478, was striking, as JD.com Inc. — Alibaba’s major rival in China — was the only Chinese internet firm on the list last year.

U.S. internet behemoths on the list included Amazon.com Inc., Google parent company Alphabet Inc., and Facebook, which was also a newcomer this year.

Although JD.com managed to raise its rank to No. 261, up from 366 a year ago, it nevertheless saw the largest financial loss this year among the Chinese companies on the list. Other money-losing candidates were mostly energy firms, including ones from the coal and steel sectors, such as Shaanxi Coal and Chemical Industry Group Co. Ltd. and China Minmetals Corporation, which have suffered from overcapacity for more than a year.

Foreign energy firms have faced similar difficulties. A trend among companies on the list this year is “continued weakness in the energy sector,” said Brian O’Keefe, Fortune’s assistant managing editor. “Companies like Royal Dutch Shell, Exxon Mobil, are still on the top 10, but they are sliding a few spots this year.”

Retail giant Wal-Mart Stores Inc. topped the list for the fourth year in a row, as the only company that made more than $400 million in revenue.

The only newcomer to the top 10 was U.S. conglomerate Berkshire Hathaway Inc. It once generated its income mainly from Warren Buffett’s investment prowess, but three-quarters of its revenue now comes from nonfinancial subsidiaries in a range of industries.