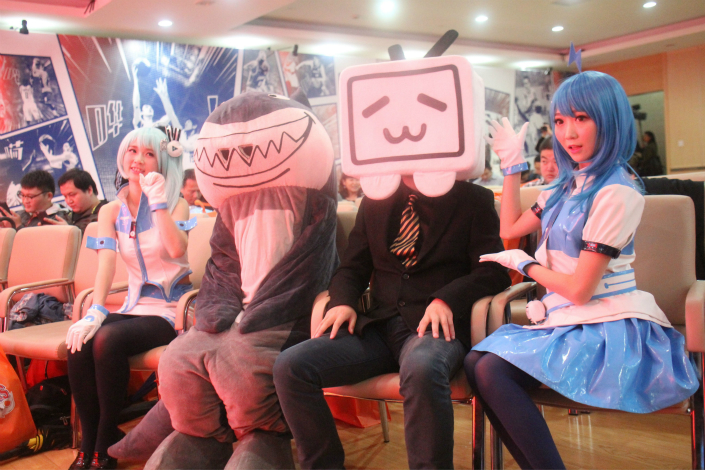 Video site AcFun has promised to take down films, newscasts, documentaries and other videos that do not comply with national guidelines on video and audio programming. Above, Bilibili cheerleaders take pictures with baskerball players in Shanghai on Oct. 27, 2016. Photo: Visual China

AcFun, one of the most popular free video sites among Chinese youth, pledged to remove “inappropriate” shows on orders from regulators, becoming the latest to get snared in a government campaign targeting content it considers objectionable.

AcFun’s move comes a week after the unexpected overnight disappearance of the vast majority of foreign films, TV series and animation from rival Bilibili, and appears to be part of a widening Beijing campaign targeted at materials including news programs, as well as foreign products and pornography.

“On June 22, the State Administration of Press, Publication, Radio, Film and Television issued a written notification asking us to rectify,” AcFun said in a social media post on Thursday, referring to a demand by the official media regulator to discontinue parts of the service that “advocate negative voices.”

The Guangzhou-based company promised to take down films, newscasts, documentaries, variety shows and other videos that do not comply with national guidelines over video and audio programming, and promised not to host pornographic or violent content.

Such content is considered sensitive in the country, where only state-owned media or those obtaining a government license can report and publish original stories. But lines have become increasingly blurred in a booming new era of social media, where popular commentators often post and stream their views and other information on current affairs over privately run services.

Nine out of every 10 users on AcFun and Bilibili are teenagers and university students, who affectionately refer to the pair of services as “Site A” and “Site B” and go to the sites to watch hit Japanese animation series and popular foreign films and programs such as “Breaking Bad” and “Agents of S.H.I.E.L.D.” But most of these video programs are uploaded by individual users and have no proper copyright permits.

“We have since our inception 10 years ago been a website with a strong sense of social responsibility,” said AcFun in its statement.

A week ago, Bilibili suddenly removed a wide range of videos in a similar move to AcFun’s.  It later cited “content inspections” as its reason for the move, and assured users that shows compliant with current rules will be made available again.

The sanitization on Bilibili appears to be still underway. For example, a search for the American science fiction series “Blood Drive” now returns a note that says: “According to rules and regulations, some results have not been shown.”