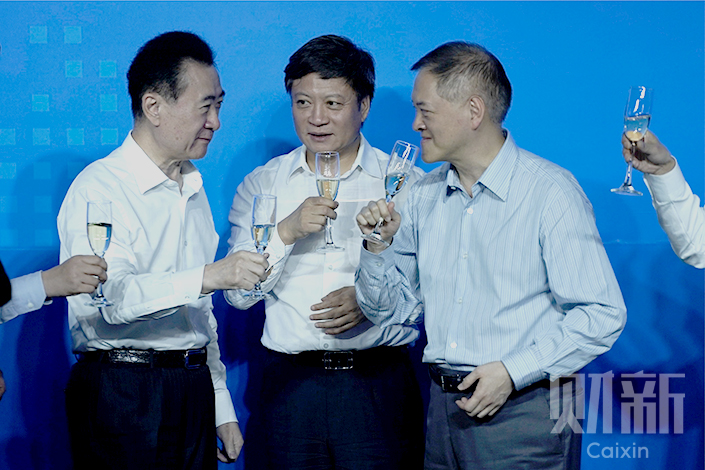 (Beijing) — Buying Dalian Wanda Group’s hotel assets will improve R&F Properties’ asset quality and make it one of the largest hotel operators in China, according to Hu Jie, board secretary of the Guangzhou-based developer.

Hu discussed the company’s sudden entry into a highly-watched transaction between Wanda and Sunac China Holdings Ltd. during a conference call Thursday with analysts. R&F only learned of Wanda’s plan to sell the hotels “by chance” last weekend and made the purchase decision over the next three to four days, Hu said.

Under a hastily arranged agreement, R&F will acquire 77 hotels from Wanda for 19.9 billion yuan ($2.9 billion) while Tianjin-based Sunac will buy Wanda’s 13 theme parks for 43.84 billion yuan. Last week, Wanda abruptly announced a plan to sell the theme parks plus 76 hotels to Sunac for 63.17 billion yuan ($9.4 billion).

The revised deal was revealed Wednesday in Beijing. Wanda staffers were seen hurriedly preparing documents just before the signing ceremony. The event was delayed as R&F Properties’ name was removed from the publicity backdrop on the stage and then restored, according to participants.

Several sources close to the matter told Caixin that Wanda and R&F didn’t settle all the terms of the deal until the last moment before the press conference.

R&F operates hotels in eight Chinese cities. The purchase of Wanda’s 77 hotels in 71 cities will make R&F one of the largest hotel operators in China, according to R&F.

“The main factor that prompted R&F’s purchase is the low price,” R&F’s Hu said. The net asset value of the 77 hotels on the books totaled 33 billion yuan, meaning a nearly 40% discount for R&F based on the 19.91 billion yuan purchase price, he said. Sunac had agreed to pay 33.6 billion yuan for 76 hotels.

R&F will not assume Wanda hotels’ liabilities, so the purchase will reduce R&F’s debt-to-asset ratio to 75% from 80%, Hu said. Wanda’s financial report showed that the 77 hotels held 5 billion yuan cash in 2016 and reported 800 million yuan in net profits.

“The price is reasonable,” said one source familiar with the companies. Given the massive size of Wanda’s hotel assets, R&F is one of the few buyers that can afford to buy them, the source said.

Wanda’s controversial earlier plan to sell its extensive hotel and tourism portfolio to smaller rival Sunac would have been one of the largest such deals in Chinese corporate history. Wanda is moving to lower its debt following a multi-billion-dollar spending spree over the past five years as part of a plan to transform itself from a real estate company into an entertainment enterprise.

“The new deal structure is more reasonable,” said an analyst who attended the conference call. “It is a good bargain to R&F and will quickly recoup cash for Wanda.”

R&F held about 90 billion yuan of cash by the end of last year and signed 40 billion yuan in sales contracts in the first half of this year, giving the company the financial capacity to make the deal, Hu said.

R&F is China’s 20th largest developer in term of sales. In 2016, the company reported 53.7 billion yuan in revenue with net profit of 6.8 billion yuan.