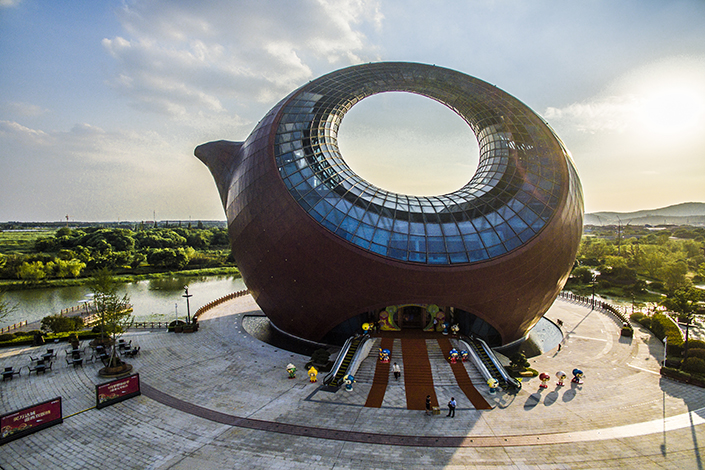 (Beijing) — Dalian Wanda Group’s abrupt sale of its $9.4 billion hotel and tourism portfolio over the past week to rival Sunac China Holdings Ltd. and then R&F Properties has raised all manner of questions about the deal’s timing and implications.

The deal, one of the largest ever in China’s real estate sector, has received mixed reviews. Although both Sunac and Wanda’s listed hotel arms saw their share prices surged in Hong Kong immediately after the announcement last week, S&P Global Ratings on Monday put Dalian Wanda Commercial Properties on downgrade watch, saying that the unexpected sale “could weaken its business position and have an uncertain impact on leverage.” All three major credit ratings agencies have taken negative action against Sunac, warning about its “aggressive expansion.”

On Tuesday, Sunac’s shares tumbled as much as 13.5%, the biggest intraday decline since July 2015. The stock’s drop was fueled by mounting speculation that banks were clamping down on Sunac due to credit-risk concerns about the acquisition, forcing Sunac’s chairman, Sun Hongbin, to step up and calm investors.

The market has been baffled by how such an immense deal could be done on the fly. It took only four days for the Wanda and Sunac to close the deal after a brief meeting between Wanda Chairman Wang Jianlin and Sunac’s Sun on July 6, sources close to the matter said.

Another surprise was a change in the deal structure on Wednesday. R&F Properties was pulled in to become the new buyer of 77 of Wanda’s hotels and paid a much lower price of 19.91 billion yuan ($2.95 billion) for those assets. Under the changed deal, Sunac agreed only to buy Wanda’s tourism assets, though for a much higher price of 43.84 billion yuan. The total deal price went up slightly to 63.75 billion yuan.

Plenty of questions have been raised about what each company wants from the deal. Analysts said it will offer Sunac, China’s seventh-largest real estate developer by sales, a quick way to beef up its land reserves and climb into the ranks of the country’s top developers.

A Sunac investor told Caixin that he believes the deal is a good bargain for Sunac as the price of the assets is nearly equal to their net value.

But many wondered what Wanda is looking for from the deal, which seems to be a major step backward since it began its foray into the tourism and culture businesses. From 2011 to 2016, Wanda signed development agreements to build 16 theme parks, six of which have opened.

“I understand why Sunac decided to buy, but what I am not clear about is why Wanda wanted to sell,” said a credit business expert at a state-owned bank.

Wanda’s Wang, one of the country’s wealthiest businessmen, told the media that the sale will cut Wanda’s debt load and help it transform its business.

What prompted Wanda to sell?

After last week’s announcement, Wang told Caixin that the deal will allow Wanda to slash its debt-to-assets ratio because it will use the proceeds from the sale to pay off some of its debt. The company plans to pay off most of its bank loans within three years, Wang said.

By unloading its immense hotel and tourism assets, Wanda appears to be taking a step toward fulfilling Wang’s “asset-light” strategy, which he has been mulling since 2014.

On different occasions, Wang has stated that Wanda “no longer wants to be a developer.” Meanwhile, the company is expanding into cultural, finance and internet businesses through a string of acquisitions and investments. Wanda now earns more than half of its revenue from sources other than real estate, the company said in its midyear report.

The asset sale came at a time when Wanda is waiting to relist its one-time Hong Kong-listed property unit, Wanda Commercial, after a HK$34 billion ($4.36 billion) privatization last year. At the time of the move, Wang promised the deal’s backers that he will relist the firm in China by September 2018 or pay them 10% to 12% in annual returns.

However, the plan has stalled during the regulatory review partly because of tightened oversight on the real estate industry’s fundraising. A source from Wanda told Caixin that the company doesn’t want to be listed as a property firm.

An analyst familiar with Wanda’s listing plan said the asset spinoff and lower debt-to-assets ratio will help the company pass a regulatory review and gain a higher valuation.

Wanda apparently accelerated its asset-light transformation after it was hit by a surprising sell-off in June following speculation that banks were offloading Wanda’s bonds due to credit-risk concerns as regulators tightened oversight on leveraged, overseas acquisitions.

As a major dealmaker, Wanda has spent about $20 billion over the past five years on overseas assets, including film producer Legendary, theater chains AMC Entertainment Holdings and Odeon & UCI Cinemas Group, as well as a U.K. luxury yacht maker.

In June, China’s banking regulator asked lenders to assess their credit-risk exposure to companies active in overseas acquisitions, including Wanda.

Who is Sun Hongbin and why Sunac?

Sunac’s chairman, Sun, 54, is a legendary figure in Chinese business circles, known for his dramatic career and enterprising spirit. Sun graduated from Tsinghua University with a master’s degree in engineering in 1985 and joined computer giant Lenovo Group. He rose quickly to head Lenovo’s corporate development department, but fell from grace after he was sentenced to five years in prison on charges of embezzling 130,000 yuan. In 2003, a judicial review determined that he was innocent of the charge.

Sun was released from prison in 1994 and started a real estate business called Sunco in Tianjin. The business expanded from a real estate agency to property development. But Sun was forced to sell his majority stake in Sunco in 2006. He then focused on his other company, Sunac, which he had set up in 2003.

Sunac was listed in Hong Kong in 2010 and reported 150 billion yuan in sales in 2016, the seventh-highest of all Chinese developers.

Since 2014, Sunac has sped up its pace of acquisitions. Despite several failures, including a 3.4 billion yuan offer for a stake in Greentown China Holdings in 2014, Sunac has won fame as one of the most-welcomed acquirers in the domestic market because of its flexible financing plans and quick payment. In 2016 alone, the company made 16 acquisition offers involving 59.5 billion yuan. In January, the company raised eyebrows by investing 15 billion yuan in the debt-ridden tech conglomerate LeEco.

Despite regulators’ steady tightening of controls over the domestic real estate market, Sun said he remains optimistic about the industry and sees a rare opportunity for property acquisitions.

Sunac is known for its strong sales team. Following the Sunac-Wanda deal, Wanda plans to partner with Sunac to develop seven more theme park projects, which Wanda will build and operate while Sunac will take charge of sales.

What’s next for Wanda?

Wang has taken Wanda away from its property developer roots and repositioned it as a diversified commercial and entertainment company. Wanda’s film, sports, finance and travel subsidiaries have made profits, Wang said, and he expects to list most of the units in the coming years, either at home or aboard.

Given the uncertainties in China’s property market, Wanda will switch its business focus to brand development and generating income from services by managing hotels or theme parks for their owners, Wang said in January.

According to Wang, under the asset-light strategy, Wanda can help property owners develop, build and operate commercial and cultural projects. It also offers use of its name. Wanda will charge for its services and licensing fees for using its brand.

Wanda will withdraw from residential real estate development projects and fully transition to an asset-light business model by 2020, Wang said.

In a July 10 interview with Caixin, Wang said he expected Wanda Commercial’s revenue from rents to exceed property sales in the two years following the sale to Sunac, making it a true commercial services company.

“Wanda Commercial will prove that it will be more valuable when it is no longer a property developer,” Wang said.

The story has been updated to reflect the announcement of R&F Properties as the new buyer of Wanda’s hotel portfolio.