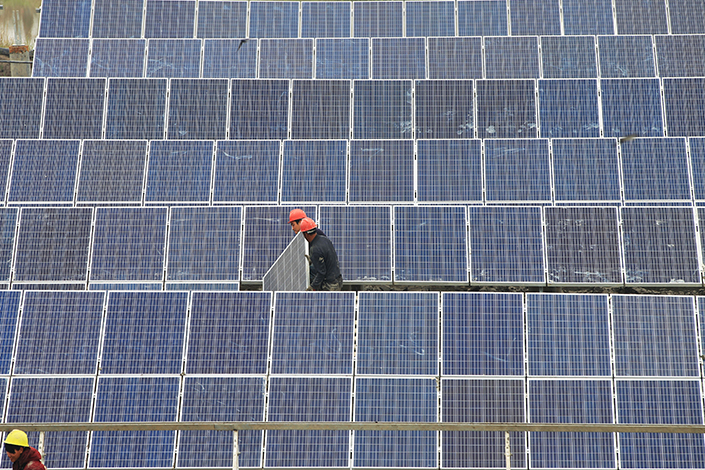 Solar-panel industry sources are predicting that India will launch an investigation into accusations that China is dumping the product in the country. Above, workers install solar panels in Yueqing, Zhejiang province, on March 29. Photo: Visual China

India is likely to launch an anti-dumping investigation against Chinese solar panels soon, potentially dealing a major new blow to an industry that is already under similar sanctions from the U.S. and Europe, industry sources told Caixin.

“I’m expecting that in the next few days, India will officially issue a statement triggering the probe,” Zhang Sen, general secretary of the solar division of the China Chamber of Commerce for Import & Export of Machinery & Electronic Products, told Caixin. Other industry sources confirmed that such a move became likely after the India Solar Manufacturers Association filed a petition calling for such anti-dumping tariffs in June.

China has risen rapidly to become the world’s largest maker of solar panels over the last decade as manufacturers took advantage of generous government support to set up shops making cheap products, often using older technology. The country now supplies more than half of the world’s panels.

But manufacturers in other countries have cried foul, saying Beijing and local governments support the Chinese industry through unfair subsidies such as cheap land for manufacturing and artificially low-interest loans supplied by state-run banks. Both the U.S. and EU conducted probes after local manufacturers complained, and the governments imposed punitive tariffs on Chinese-made panels as a result.

Zhang said India may be set to take action now due to the recent rapid influx of Chinese solar panels as demand slows in the U.S. and Europe, both due to maturation of those markets and also because of effects of punitive tariffs. Chinese panel exports to India surged 82% in the first five months of the year to $1.8 billion, accounting for about a third of all of the country’s solar-panel exports, according to industry data. Chinese panel-makers have been relying heavily on low prices to achieve that growth, Zhang added.

After the launch of an investigation, the Indian government would have three to six months to make a final ruling, which could include punitive tariffs or other remedial action.

India now accounts for about 18% of exported Chinese panels, said Patrick Dai, an analyst at research house Macquarie. He noted that India previously launched two similar investigations into dumping of Chinese panels, but that neither resulted in punitive tariffs.

“I think this time very likely it could come to the same end,” he said. “To accomplish (Indian Prime Minister Narendra) Modi’s ambitious plan to install 10 gigawatts of solar power per year, up from 5 gigawatts last year, India has to depend on cost-effective imported panels.”

Dai noted that the big majority of solar panels imported to India now come from China, and that the levying of punitive tariffs could result in a 30% to 200% rise in prices. That would be difficult for domestic Indian manufacturers to replace since their own output is very low, he said.

“This would seriously harm India’s renewable plan by 2020,” he said.

Punitive tariffs would provide another serious blow to Chinese panel-makers, which are already suffering from restrictions in the U.S. and Europe and also a broader downturn for the highly cyclical industry. Data from China’s own industry association shows that the value of exports from domestic panel-makers fell 10.4% in the first five months of this year to $5.64 billion.