Beingmate to Spin Off Unit After Company’s Poor Earnings 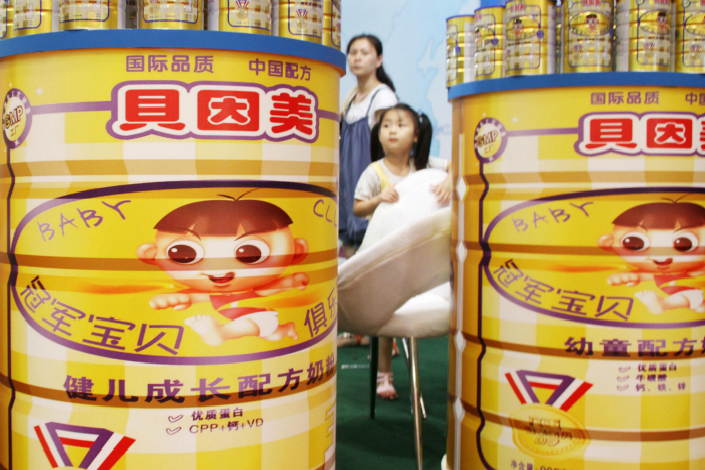 Beingmate, a Chinese maker of infant formula, has denied market speculation that company officials are involved in insider trading. Above, Beingmate products are displayed at a Women and Children Industry Expo in Beijing in July 2012. Photo: IC

(Beijing) — Chinese infant-formula-maker Beingmate has announced plans to spin off a poor-performing upstream business, days after the parent company revised its earnings forecast from a profit to a loss.

Beingmate Baby & Child Food Co. Ltd. said Tuesday it will be selling a subsidiary that runs dairy farms in northeastern China’s Heilongjiang province “to improve earnings results of the company,” according to its filing with the Shenzhen Stock Exchange.

The subsidiary — Beingmate Anda Dairy Co. Ltd. — saw steady losses in 2016 and during the first quarter of this year as “global raw milk prices have lingered at a low level,” Beingmate said.

On July 14, the company downgraded its earnings forecast from a profit to a loss of at least 350 million yuan ($51.8 million) for the first six months of the year.

The revision came just three days after a dramatic plunge in Beingmate share prices, which dropped by the 10% daily limit within minutes of market opening, automatically triggering a suspension in the trading of its stock. The company has since suspended trading indefinitely, leaving its share price stuck at 11.97 yuan, its lowest since November.

The moves have triggered market speculation that the change in profit forecast might have been leaked earlier, and that the company might be involved in insider trading.

On Tuesday, Beingmate Chairman Wang Zhentai denied the claims, saying that the revised figures were out on the same day as they were announced — three days before the price plunge — and the company suspended trading due to a pending deal to sell the dairy farm unit that it announced on Tuesday.

Beingmate blamed its disappointing earnings forecast on a major regulatory change that took effect in October. Under the new rules, infant-formula-makers – foreign and domestic – can produce no more than nine types of formula under no more than three brands, which is expected to cut the number of baby formula products in China by 75%.

“In 2016, the whole infant dairy industry was under uncertainty after the new regulation was issued,” said Cheryl Ni, food and drink analyst at market research firm Mintel. “All the major brands have made efforts to cut prices and clear inventories.”

“The suffering has occurred especially to domestic dairy companies that are burdened by the fact that some Chinese consumers prefer to buy overseas infant formula,” Ni said.

In 2016, Beingmate reported its first annual loss since it was listed in 2011, of 780 million yuan. Frequent personnel changes since the end of last year — including the resignations of its vice chairman, chief financial officer and deputy general manager — have only added to the uncertainty surrounding the company.

The Shenzhen Stock Exchange ordered Beingmate to disclose any stock transactions made by the company’s executives over the past three months. The purpose of the order was to determine whether the recent share-price plunge involved an information leak or insider trading.

Beingmate said on Tuesday it will provide the answers to the request on Friday.