By An Limin, Lu Bingyang and Yang Ge 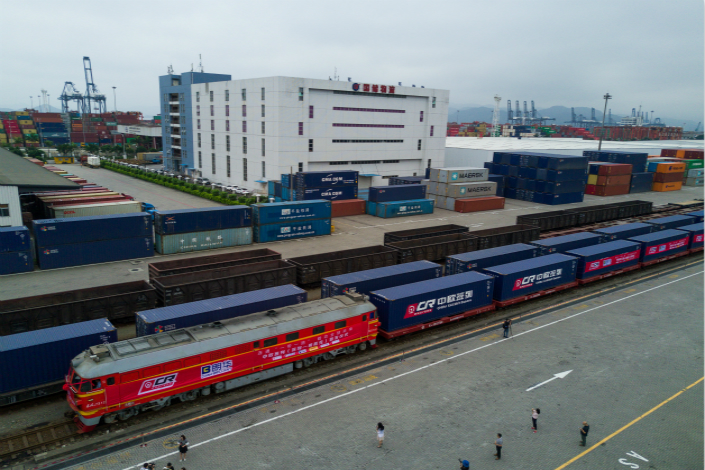 Dongfeng Motors, FAW and other carmakers are working with China’s major railway operator to develop better delivery systems that, for example, could see rail lines built into car assembly plants for more efficient shipping. Above, a freight train departs from Shenzhen on May 22. Photo: IC

The partnerships with FAW Group Corp. and Dongfeng Motor Corp. mark the latest in a string for China Railway Corp. (CRC), the nation’s railway operator that is trying to shed its state-run legacy and become more commercially oriented. The deals will see CRC buy more rail cars capable of delivering finished autos, and work with railway equipment makers to refine the design for such transport cars.

At the same time, Dongfeng, FAW and others are working with CRC to develop better delivery systems that, for example, could see rail lines built directly into car assembly plants for more efficient shipping. Such solutions would be designed with the ultimate aim of giving carmakers as close to end-to-end shipping as possible, allowing them to move their products directly from assembly lines to dealer showrooms.

The movement from traditional road- to train-based shipping is being driven by major changes to China’s rules governing the big trucks traditionally used for such deliveries. Beijing is trying to get rid of trucks that often are dangerously overloaded, while at the same time removing older, heavily polluting trucks from the road.

As part of that effort, the government said that all double-decker trucks carrying two rows of cars each on their top and bottom decks would be banned as of Sept. 21, 2016. It added that all trucks used for car deliveries would be required to meet national standards by July 2018.

Last year’s initial restriction led to a 34% shortage in road shipment capacity for automakers, and the situation is expected to worsen as the 2018 deadline approaches, a Dongfeng spokesman said.

The development could provide a further lift for CRC, whose freight shipping business suffered several years of decline before finally returning to a growth track this year. The declines caused revenue from freight operations to sink below that from passenger operations, though the rebound allowed the former to overtake the latter once more in the first quarter of this year.

The move to more freight shipping is also expected to provide a boost to CRRC Corp. Ltd., China’s main maker of rail equipment, whose own growth is also slowing as Beijing slows down its aggressive program to build up a national high-speed rail network.