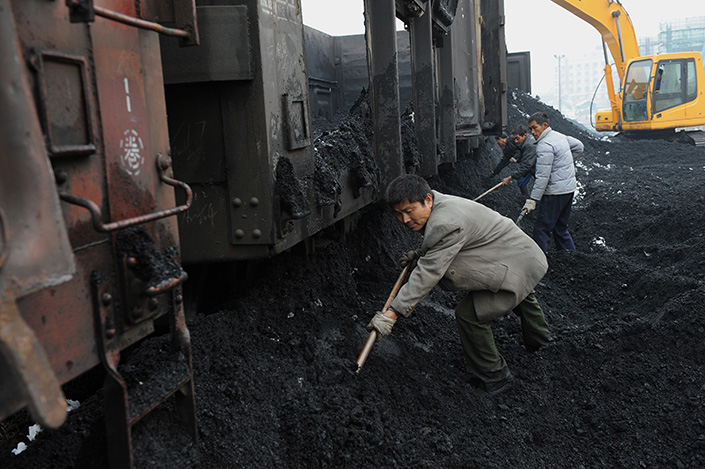 Coal has stoked a recovery in China Railway Corp.'s freight volume, which rose to 1.82 billion tons in the first six months of this year. Photo: Visual China

China’s main rail operator said its freight volume rose 15.3% in the first half of 2017, reversing three years of declines, as growth accelerated in June on a recovery in coal demand.

China Railway Corp.’s (CRC) freight volume totaled 1.82 billion tons in the six months through June, according to a newly released report from the railway ministry. Shipment growth accelerated to 16.3% for the month of June, well ahead of the 14.7% growth rate in the first five months of the year.

The rail ministry didn’t provide any figures for freight revenue in the first half of the year.

The strong performance marks the first growth in freight shipments for CRC since 2013. The business had suffered in the last year due to sluggish demand for coal, which put downward pressure on both shipments and freight rates. That situation improved in the first half of this year, as prices rebound on stronger demand.

That rebound was evident in the latest quarterly results from publicly listed Daqin Rail Co. Ltd., whose largest assets include one of the nation’s most heavily used coal transport lines, which is considered an industry benchmark.

Daqin’s shipment volume jumped 33% in the first half of the year to 210 million tons, as its profit soared by about 90%, according to an earlier preliminary results announcement to the Shanghai stock exchange.

CRC’s rebound comes amid similar improvements from other freight haulers as the highly cyclical industry emerges from several years of downturn. Earlier this month, leading ocean shipping firm COSCO Shipping Holdings Co. Ltd. said it had returned to profitability in the first half of this year after posting a massive loss for 2016.