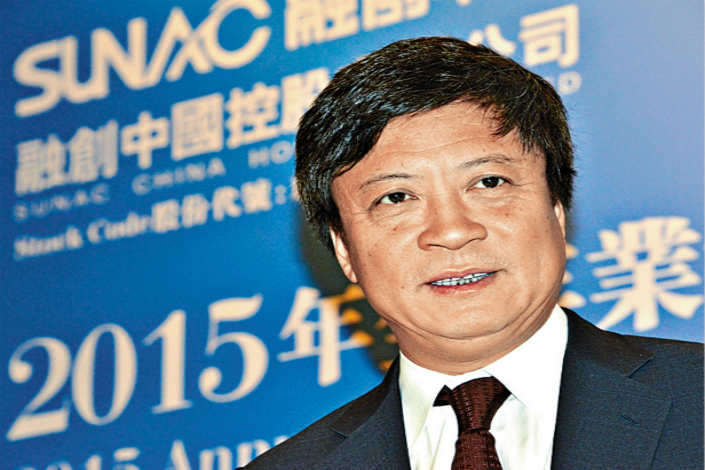 Sunac China Holdings Ltd. has unveiled a plan to raise HK$4.03 billion ($516 million) through a sale of 220 million new shares at HK$18.33 each. Above, Sun Hongbin, Sunac founder and chairman, attends a news conference in Hong Kong on March 29, 2016. Photo: IC

Shares of Sunac China Holdings Ltd. have managed to stay above their share-placement price since Tuesday, suggesting that investors remain sanguine about the prospects of its watered-down — albeit still-ambitious — plan to acquire Dalian Wanda’s theme parks.

In a regulatory filing with Hong Kong Stock Exchange early Tuesday, the placement price of 220 million new shares represented a discount of 8.8% to Sunac’s Monday closing price of HK$20.10. The share placement is expected to conclude by the end of Thursday, the filing said.

It was Sunac’s second share placement in 10 months. In late September, the company raised HK$2.80 billion by selling new shares to repay some of its debts and replenish its working capital.

On July 10, Sunac said it would acquire Dalian Wanda’s 13 theme parks as well as 76 hotels for 63.17 billion yuan ($9.36 billion). That news raised concerns from investors and credit ratings agencies that Sunac was taking on too much debt.

Nine days later, the deal was restructured by bringing in R&F Properties to buy Wanda’s hotel assets, and Sunac will buy only the theme parks for 43.84 billion yuan.

Sunac was listed in Hong Kong in 2010 and reported 150 billion yuan in sales in 2016, the seventh-highest of all Chinese developers.

Since 2014, Sunac has sped up its pace of acquisitions. Despite several failed bids, including a rejected 3.4 billion yuan offer for a stake in Greentown China Holdings in 2014, Sunac has won fame as one of the most-welcomed acquirers in the domestic market because of its flexible financing plans and quick payment. In 2016 alone, the company made 16 acquisition offers involving 59.5 billion yuan. In January, the company raised eyebrows by investing 15 billion yuan in the debt-ridden tech conglomerate LeEco.