By Li Liuxi and April Ma 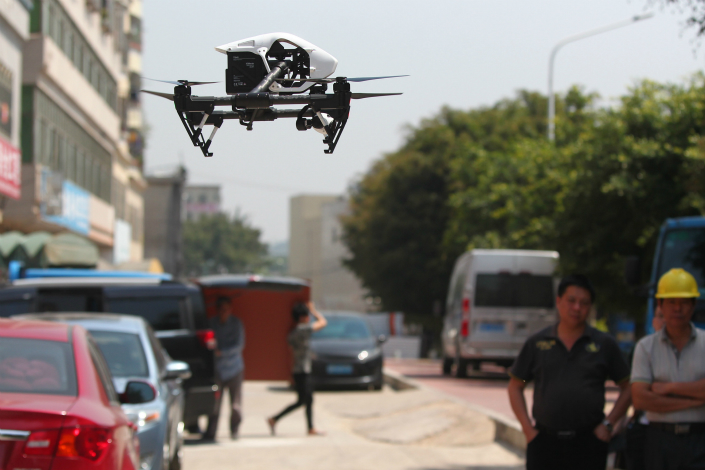 Guangzhou has become the latest Chinese city to enact regulations that tighten rules governing the use of drones. Above, law-enforcement personnel use a drone to patrol in Longgang district in Shenzhen, on April 15, 2015. Photo: Visual China

The capital of Guangdong province — the center of China’s high-flying drone-making industry — is preparing to ban drones from buzzing over schools, tourist attractions and commercial circles, and near airports.

The step going into effect next week in Guangzhou follows similar ones by several other Chinese cities to clip the wings of drone users, who until relatively recently had faced little nationwide regulation. China is the source of 70% of all drones sold worldwide, and what has grown into a $572-million domestic industry was partly able to take off so quickly due to paltry regulation, analysts say.

But concern has grown that drones could cripple a jetliner — the potential impact of which has been likened to a strike by a cannonball. In mid-April, more than 100 flights were grounded or diverted by wayward drones near Chengdu Shuangliu International Airport in southwestern Sichuan’s provincial capital.

Guangzhou will mark off no-fly zones, though the city’s public security department doesn’t yet have clear procedures for drone flyers, and referred Caixin to district police stations.

“We are still trying to determine which sites are off bounds, but for now, we are going by the broader definitions stipulated in the official guidelines,” said an officer at local police station, referring to the unfolding national rules.

The country’s air force controls China’s airspace, and technically, drone users need advance permission to take to the skies, but compliance has been lax. This and the disruptions at Chengdu’s airport have prompted the central government to start rolling out stricter rules. For example, the China Administration of Civil Aviation in mid-May required owners to register drones with the users’ real names. Comprehensive nationwide regulations on drones are expected to be released around September.

In addition to Guangzhou, other areas that have mapped out no-fly zones for drones include the eastern city of Xi’an, the interior cities of Chongqing of Zhengzhou, as well as Sichuan province and Beijing.