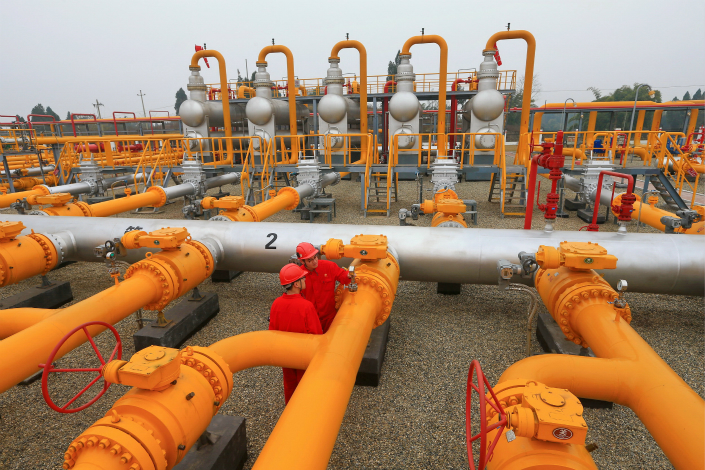 China has set a deadline for all state-owned enterprises owned by the central government, such as PetroChina’s parent, to turn themselves into limited liability or joint-stock companies by the end of 2017. However, more than half of those companies have failed to undergo the transformation. Above, PetroChina employees conduct a regular safety inspection on Jan. 3 at a natural gas-cleaning plant in Sichuan province. Photo: Visual China

(Beijing) — China’s government has agreed to give state-owned enterprises (SOEs) a range of concessions on taxes and fees to speed up their restructuring into modern corporate entities and ensure they meet a deadline set for the end of this year.

The State Council, the cabinet that oversees the government, this week approved a plan to give companies favorable treatment on issues such as asset valuation, land use and taxes. The decision removes some key obstacles to progress on overhauling the corporate governance system for SOEs that’s part of the government’s long-running efforts to modernize and restructure the bloated state-owned sector and make companies better run, more efficient and more competitive.

At the Central Economic Work Conference in December 2016, the government set a deadline for all SOEs owned by the central government to turn themselves into limited liability or joint-stock companies by the end of 2017.

But 69 of the 101 central SOEs and 3,200 of their subsidiaries, with combined assets worth around 13.63 trillion yuan ($2 trillion), 27% of the total, have so far failed to undergo the transformation. Laggards include State Grid Corp. of China, the world’s biggest utility, runs most of the country’s power transmission network; China National Petroleum Corp. (CNPC), the country’s biggest oil and gas producer, which owns Hong Kong-listed PetroChina Co. Ltd.; and China Grain Reserves Corp., also known as Sinograin, a grain storage and transportation giant.

In a previous wave of reform in 2003, the State Council set up the State-owned Assets Supervision and Administration Commission (SASAC) to manage 196 state-owned enterprises owned by the central government. SASAC duties included appointing top executives and approving activities such as mergers, restructuring or asset sales. Over the years, the number of these SOEs has fallen due to mergers and consolidation, and now stands at 101, including two nonprofit entities, such as the China National Administration of Coal Geology.

Turning these state-owned behemoths into proper commercial companies with modern corporate governance structures and re-registering them with the State Administration for Industry and Commerce requires a huge amount of work to comply with various laws including the Company Law and the Law on State-Owned Assets of Enterprises.

All of a company’s assets have to be accounted for, and decisions need to be made about who will own them and which will be split out and handed over to the government. Ownership of all the land used by the company, along with thousands of properties such as factories, offices and company-run hospitals and schools, has to be determined and assigned a value.

Carrying out detailed evaluations of every asset owned by these companies, which have operations scattered right across the country and also overseas is a time-consuming process often fraught with difficulty.

The prospect of having to pay out billions of yuan in tax as a result of the change in corporate structure and the revaluation of assets has also contributed to the delays. Based on current laws, SOEs could face massive value-added tax bills if the assets they own have appreciated since their last valuation. SASAC has previously estimated that the combined value-added tax liability of the 69 companies could reach more than 300 billion yuan.

Land use has been another obstacle. Under the law, an SOE that has turned itself into a limited liability company or joint-stock company needs to pay land transfer fees if it continues to use land that was allocated by the government in previous years. SASAC has estimated that the combined fees for the 69 SOEs yet to restructure could amount to as much as 500 billion yuan.

Given the potential liabilities and the amount of work involved, many SOEs have been slow to undergo their corporate restructuring, raising the risk that the deadline set by the government will be missed. Over the last few months, SASAC has been busy negotiating with various government ministries and departments to try and reach a compromise that would allow the SOEs to restructure without having to meet the potential financial consequences.

Now, for example, an SOE that changes its corporate structure but remains wholly owned by the government and has no external shareholders won’t need to have its assets revalued immediately. A company that falls into this category will also be exempt from paying any value-added tax that’s due as a result of an asset evaluation, a member of the team that worked on the latest guideline who declined to be identified told Caixin.

The government’s drive to promote “mixed-ownership” reform, which involves bringing in investors from the private sector, has made things more complicated. So far, mixed-ownership reform is being trialed in a few industries including power, energy and telecommunications, but it’s not clear at the moment whether companies should first carry out their corporate restructuring or whether they should get their mixed-ownership reform done first.

Wholly owned SOEs will also be exempt from paying land transfer fees for up to five years, the team member said. SOEs that plan to open up to outside shareholders will benefit from discounts on value-added tax on asset appreciation and on land transfer fees, although no details have been released so far.

State Grid, CNPC and Sinograin are currently wholly owned by the State Council. CNPC has already responded to the State Council announcement, posting a statement on its website outlining corporate system reform and mixed-ownership reform as two of the six major tasks for the second half of the year.