By Arthur Xie and Yang Ge 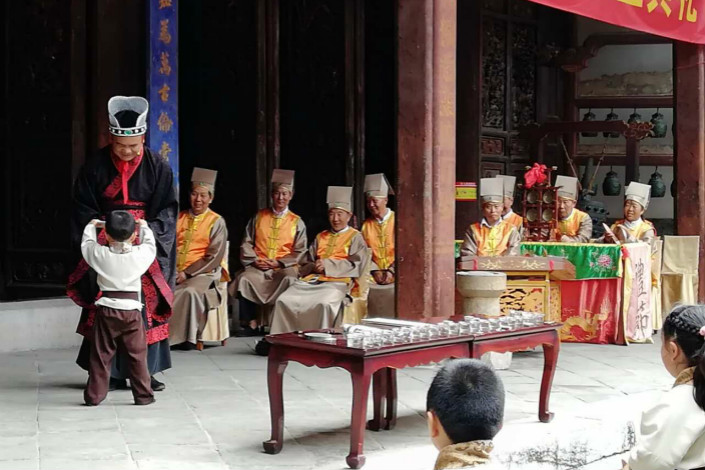 A preschooler gets ready to bow and receive a graduation certificate from his teacher during a ceremony at the Confucian temple in Jianshui county, Yunnan province. Both are dressed in traditional Chinese clothes. Photo: Yang Ge/Caixin

This “First Writing Ceremony,” held in the Confucian temple there, is an important rite of passage before the students can start elementary school in September, organizers told City Times, a Kunming newspaper.

The Confucian temple of Jianshui, built in 1285 during the Yuan Dynasty (1279-1368), is the third-largest Confucian temple in China, after the one in Qufu, Shandong province — the birthplace of Confucius — and the massive 700-year-old temple in Beijing. The Jianshui temple has been renovated and expanded more than 50 times in the past 700 years.

Jiejing Ji, director of the Chengxian National Academy in Beijing, which promotes the study of Chinese classics and traditional culture, told Chinanews.com that the ceremony involves writing the Chinese character for “person” (人) on a sheet of crisp, white paper with a traditional calligraphy brush. The character was seen as significant as it was also a symbol for being a righteous person. In some regions, children might write the character for gratitude (恩), which will teach them to be grateful; or the character for justice (正), which symbolizes the meaning of light and benignity.

The 6-year-olds, who had learned a few Confucian classics by rote in preschool, also got a “graduation certificate in Confucian studies.”

These rituals, held to pay respect to Confucius just before the school year begins in September, have slowly made a comeback in the other parts of China as well since the turn of the millennium.

Confucius, born in the sixth century B.C., traditionally had a stature in China akin to that of Socrates in the West. But his teachings fell out of favor in the 1910s after reformists keen to push forward development based on science launched the New Culture Movement. Another blow was the decadelong Cultural Revolution (1966-76), when Red Guards eager to “Smash the Four Olds” — old customs, old culture, old habits, and old ideas — targeted Confucian scholars. By the 1980s, Confucianism was so maligned that some historians, including Yu Ying-shih, called it a “wandering soul.”

But the rapid economic transformation in the last two decades that has brought prosperity to the country has also left many restless, and more people are turning to ancient ideas for a connection to their roots.

However, some scholars have questioned the authenticity of the First Writing Ceremony, and say that it might be a modern creation.

There was a comparable tradition in which students would pay respect to Confucius at the start of each month according to the Chinese lunar calendar by providing offerings of minced rabbit meat, chive flowers, winter dates and chestnuts, Peking University history professor Zhao Shiyu told Chinanews.com. But academic terms in contemporary China were introduced from the West. “So obviously, it is not our tradition” to mark the end of preschool or the start of elementary school, Zhao said.

Some others, however, call for keeping an open mind to newly invented traditions. Ji, from Guozijian, which served as the main education administration for the Yuan, Ming and Qing dynasties, said that any ritual or traditional culture will evolve with the development of society. “To be inherited by future generations, they have to ‘live’ in the present.”