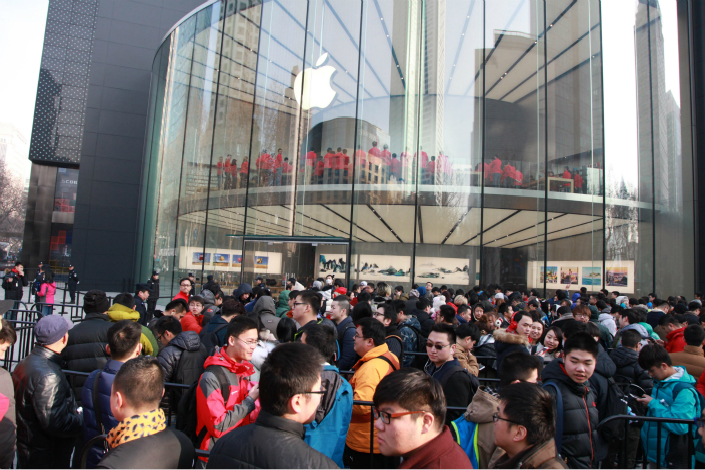 Apple continues to lose momentum in the world’s largest smartphone market as it feels the pinch of Chinese consumers’ tepid reaction to its most recent iPhone.

China, once the tech giant’s most-promising market, was the only region where Apple’s revenue fell for the quarter. It was the sixth consecutive quarter that revenue of the world’s most valuable company fell in the country, where the brand and its products have been viewed as a status symbol and the epitome of cutting-edge technology.

But Apple’s latest iPhone model disappointed Chinese consumers, who snubbed the phone for looking too much like its predecessor without offering any breakthrough functions.

The iPhone 7, released in the fall of 2016, is the primary reason why Apple has continued to lose ground in the Greater China market, said James Yan, director at Counterpoint Research.

“Fewer people have been upgrading to the latest iPhone over the past year, and consumers have been taking a more-delayed approach to buying” Apple products, Yan said. “They have been opting for older, marked-down products because they figure older models are not that much different.”

Apple is also facing tougher competition from Chinese smartphone brands such as Huawei Technologies Co. Ltd. and, increasingly, Oppo Electronics Corp. and Vivo, which have leapfrogged over the California-based company in terms of market share.

Shenzhen-based Huawei was the top smartphone seller in China in the first quarter this year, when it had 20% of the market, according to data from IDC. Meanwhile, Oppo and Vivo had a combined 30%. Apple phone sales accounted for 9% of the market.

However, Apple’s sales are expected to rebound after it releases the long-awaited iPhone 8 this fall.

The company forecast global revenue of between $49 and $52 billion over the next four months, an increase of as much as 15% from the latest quarter.