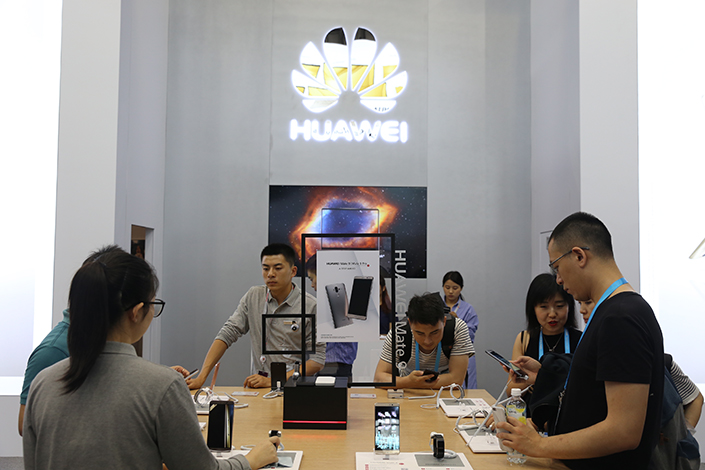 Huawei Technologies Co. Ltd. has expressed "outrage" at "malicious innuendo" that the company is equipping its smartphones with eavesdropping devices. Above, Huawei smartphones are exhibited at the Consumer Electronics Show Asia in Shanghai on June 7. Photo: IC

Telecom giant Huawei Technologies Co. Ltd. denied it has put eavesdropping devices into its popular smartphones and computer products, responding to online rumors that touched on a sensitive area for one of China’s leading exporters.

Huawei’s older networking equipment is informally banned from export to the U.S. due to Washington’s concerns that the Chinese-made products could be used for spying. The company insists such concerns are unfounded, but has not taken major steps to try to get the restriction removed. Instead, it has recently switched focus to its newer consumer products that are less sensitive.

In a nod to that sensitivity, the company issued a formal reaction to online rumors of eavesdropping devices being secretly installed in its smartphones, whose sales have soared over the last five years to make Huawei the world’s third-most popular brand.

One such rumor cited an employee on one of Huawei’s production lines in the southern city of Dongguan, saying the company had secretly installed eavesdropping software that couldn’t be removed in all of its smartphones. It added the software could steal user information contained on the phones, including photos, apps and other personal items.

“We have noticed the … rumors and express our outrage at this kind of malicious innuendo that is harming Huawei’s reputation,” Huawei’s consumer device division wrote in a posting on its official account on Weibo, China’s equivalent of Twitter.

It added the company has already formed a team that is working with police to identify the party behind the rumors, and will take legal action.

“Huawei has been mindful of its customers for years … and takes protection of their privacy very seriously,” it said in the post. “Here we call on the entire industry to engage in fair competition and put their energy in how to give customers the best value and create a healthy market environment.”

The rumors and Huawei’s response come as new data show the company retained its title as China’s leading smartphone brand for the second consecutive quarter in the three months through June, after briefly losing the title to domestic rival Oppo Electronics Corp. last year. Huawei reported its global smartphone sales rose 20.6% in the first half of the year, as it sold 73 million units.  Separately, research house Canalys said Huawei sold 23 million smartphones during the second quarter in China, the world’s largest individual market accounting for about a third of all global sales.