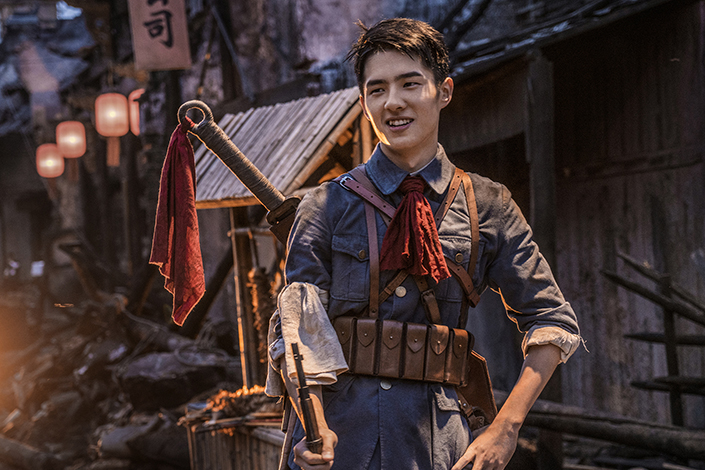 Teen idol Liu Haoran plays Su Yue, one of the leaders of People's Liberation Army of China, in the blockbuster film “The Founding of An Amy." Photo: IC

(Beijing) — China’s latest burst of big-screen patriotism — the story of the early days of the People’s Liberation Army — is pulling in an unlikely base of fans: young moviegoers.

“The Founding of an Army” was commissioned by the government to mark the 90th anniversary of the People’s Liberation Army (PLA) on Aug. 1, 1927.

The film recounts the revolt by the then-fledgling Chinese Communist Party, which eventually led to the founding of the PLA.

In its first six days, it raked in more than 250 million yuan ($37 million). It is expected to net about 600 million yuan by the end of its run in theaters, according to box office database Xiniu Entertainment, though it’s unclear how long it will show.

But some have taken issue with the young and attractive cast, saying such start glamorizing dishonors the true historical figures.

“Someone is trying to make a box office killing off of history,” said Ye Daying, the grandson of historical military leader Ye Ting, who objected to how his grandfather was portrayed. “Who is this feminine boy who can hardly stand up straight playing my grandfather? Who are you trying to humiliate!” Ye vented on social media.

Ye also feels he should have been consulted before the film was produced. China’s film rules stipulate that producers must receive written consent from national heroes and historical figures or their families, who are authorized to contribute their suggestions to the script.

Its director was Andrew Lau, who directed the Chinese remake of “Infernal Affairs,” about a crooked cop, as well as the “Young and Dangerous” series about Hong Kong gangsters. Lau said his goal was to give the PLA’s story “a burst of new energy,” and tell a more powerful story than the earlier two movies in the “Founding” trilogy — “The Founding of a Republic,” which was released in 2009 and marked the 60th anniversary of the nation, and “Beginning of the Great Revival,” which came out in 2011 and honored the 90th anniversary of China’s Communist Party. Each made about 400 million yuan in about a 30-day run.

Lau wanted to shake things up a bit so that the audience would enjoy both the action and the reenactment of history, said Zhang Tusen, deputy chief of China’s film and broadcast regulator, in a social media post.

The clash in views over the film continues between idol-chasing fans and those who value accurate historical depictions. But the topic is closed for discussion on Douban, a popular film rating site.

Fans and critics are not allowed to comment or rate the film on a scale of one to five. The commentary and review sections on the film’s Douban page, where visitors usually vigorously debate new movies, were disabled.