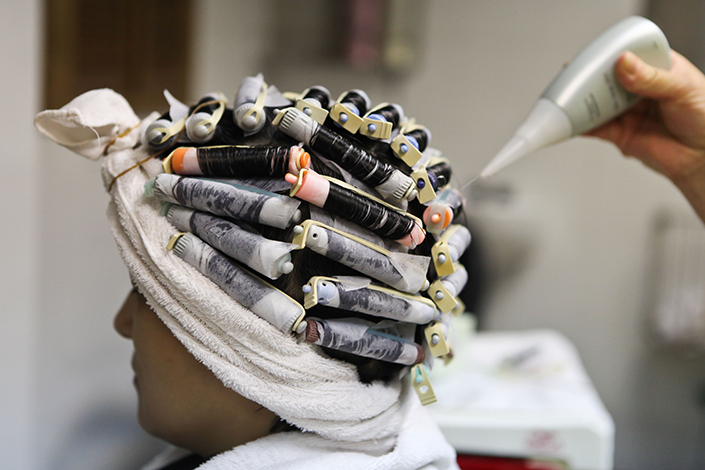 A hair stylist curls a woman's hair in a salon in Shanghai on July 10, 2012. Photo: Visual China

(Beijing) — Activity in China’s services sector softened in July as growth in new business weakened and hiring was sluggish, a Caixin survey showed on Thursday, paring optimism about the short-term outlook after a gauge of manufacturing rose to a four-month high.

The Caixin China General Services Business Activity Index fell to 51.5 from 51.6 in June. Although that’s still well above the “50” line that divides expansion from contraction, it was the same reading as April, which was the lowest this year and the weakest since May 2016.

The subindex of new orders fell for a second month, edging down to 51.8 after a large drop to 51.9 in June from 53.5 the previous month. July’s number was the lowest reading since February 2016.

Despite the marginal decline in the services index, the Caixin China Composite Output Index, which covers manufacturing and services companies, hit a fourth-month high of 51.9 for July, bolstered by a pickup in factory activity as the Caixin China General Manufacturing Purchasing Managers’ Index (PMI) rose to 51.1 from 50.4 in June.

Zhong Zhengsheng, director of macroeconomic analysis at CEBM Group, a subsidiary of Caixin Insight Group, said that growth momentum in the world’s second-largest economy was “stronger than expected” at the start of the third quarter “mainly due to sustained recovery in the manufacturing sector.”

However, “downward pressure on the economy likely remains as the index gauging companies’ confidence toward the 12-month business outlook dropped in both the manufacturing and services industries,” he said.

The subindex of business expectations in the services industry survey dipped to the weakest in eight months in July while a gauge of manufacturers’ optimism about the outlook fell to an 11-month low.

Waning corporate confidence suggests companies are not optimistic that the acceleration in China’s economic growth in the first half of the year can be sustained. Gross domestic product (GDP) increased by 6.9% in the first six months of 2017, picking up from 6.7% in 2016 and higher than the government’s target for expansion of around 6.5% for this year. The better-than-expected performance was driven by infrastructure spending, strong growth in exports and a buoyant property market.

The services sector — which includes finance, real estate services and marketing, transportation, and retailing — has become an increasingly important part of the Chinese economy, reflecting a shift away from traditional heavy-industry manufacturing and exports.

Also known as the tertiary sector, it accounted for 51.6% of the country’s economic output in 2016, up from 50.2% in 2015, and contributed to nearly 60% of GDP growth, according to the National Bureau of Statistics (NBS). The services sector is more labor-intensive than manufacturing, and policymakers are counting on it to create more jobs.

Payroll numbers at services companies continued to expand for the 11th straight month in July, but at a rate that was only marginally faster than in June and the second-lowest since August 2016.

The sluggish growth in services hiring and the deepest contraction since September in the employment subindex in the manufacturing PMI led overall hiring in Caixin’s China Composite Output Index to contract for the fourth consecutive month in July.

Inflation in the services sector appears far more subdued than in manufacturing. The subindex of input prices of services firms posted the first sub-51 reading since August 2016 while output prices increased at a marginally faster rate than the previous month.

The Caixin services PMI reading for July dovetails with the official non-manufacturing Purchasing Managers Index published by the NBS on Monday. The gauge dropped to 54.5 from 54.9 in June as a pickup in construction activity failed to offset a softening in other services industries, with gauges for road transportation, real estate, and resident services and repair all falling below 50. The Caixin survey does not include the construction sector.