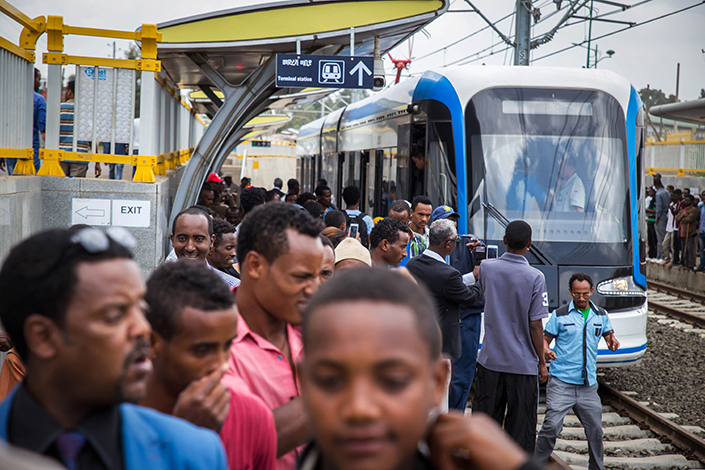 Officials of state-owned enterprises now will be held accountable for decisions in overseas deals that led to financial losses if the officials were negligent or if the deals violated regulations. Above, streetcar riders in Addis Ababa, Ethiopia, in September 2015 prepare to board vehicles built by China Railway Engineering Corp. Photo: Visual China

(Beijing) — China has issued regulations to strengthen scrutiny over overseas investment by state-owned enterprises (SOEs) as part of the government’s ongoing fight against capital outflows and financial risks.

Officials will be held accountable for decisions that led to financial losses if the officials were negligent in performing their duties or where deals were done in violation of regulations, the Ministry of Finance said on Wednesday. The new rules also require companies to conduct thorough due diligence into the economic, industrial, tax, legal, political and other risks of an overseas project before investing.

The ministry said that SOEs have been leading the way in implementing China’s “go out” strategy, which involved expanding in overseas markets and buying technology and resources, with their investment ballooning in value and broadening from minerals and energy to telecoms, infrastructure and entertainment.

However, some of the deals have had low returns on investment and anemic profitability, mainly due to careless decision-making done without solid feasibility analysis, weak financial risk management, and a lack of post-investment supervision, it said.

The document listing the regulations, which was dated June 12, governs the financial management of overseas investment in nonfinancial sectors by wholly SOEs and companies where the state has a controlling stake.

“The problem-oriented rules clearly put forward requirements on financial management before, during and after (the investment is made),” the ministry said in the statement.

“This will improve the investment returns and the ability of state capital to serve the ‘go out’ strategy and the ‘Belt and Road’ initiative,” it said, referring to President Xi Jinping’s signature drive to boost connectivity and cooperation between China and countries in Asia, Africa and Europe, primarily through infrastructure investment and construction.

Under the regulations, which came into effect on Tuesday, project leaders will be audited when they leave their jobs. Deals that have suffered major losses should be subject to on-the-ground investigations either by the investing SOE or by a third-party auditor appointed by the company.

“Employees will be held accountable according to the law if they are found to have violated regulations in making decisions, or failed to perform or neglected their duties in terms of financial management so that losses are incurred to their company’s overseas investment,” the document stated.

In addition to the detailed pre-investment due diligence requirements, after a deal is completed, SOEs are required to keep better track of major issues such as the purpose and value of the investment, the size of their holding, the financing structure of the deal, and the key resources or industrial capacity acquired.

The government has become increasingly concerned that many Chinese companies have been overzealous in their overseas shopping sprees and that they have taken on too much debt and risk that could threaten their viability and spill over into the domestic financial system.

A surge in capital outflows last year further unnerved the government and led authorities to tighten controls on overseas mergers and acquisitions.

China’s outbound direct investment (ODI) in nonfinancial sectors jumped 44.1% last year to $170.11 billion, with Chinese companies investing in 7,961 overseas enterprises in 164 countries and regions, according to data from the Ministry of Commerce. But the scale of spending has slumped this year after regulators raised scrutiny of deals. ODI dropped 45.8% in the first half of 2017 to $48.2 billion, with overseas deals involving property developers, hotels, entertainment and sport clubs, which are discouraged by the government, all shrinking significantly, official data showed.

At a meeting of the National Financial Work Conference last month that focused on containing financial risk, Xi pledged to place reducing the debt of SOEs as “the priority of all priorities.”