By Fran Wang and Hou Wen 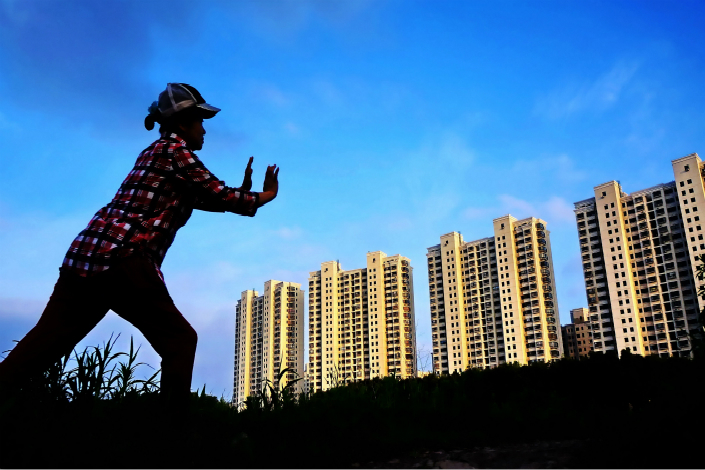 Beijing plans to roll out a program similar to Shanghai's in which qualified homebuyers pay only part of the purchase price of an apartment, with the municipal government paying the rest. The homebuyer will then have the option to pay the rest later. Above, a woman exercises in front of a building in Shanghai in June 2012. Photo: Visual China

(Beijing) — Beijing is planning to offer apartments whose ownership is shared between the purchaser and the local government in an effort to make housing more affordable as soaring prices have left thousands of aspiring homebuyers out in the cold.

Under the program, the government will allow buyers to pay for only part of the apartment but give them the right to use the entire property. Owners will have an option to buy the outstanding share of their home at market prices after five years.

Home prices in Beijing are among the highest in the country, with the cost in many areas of the city center exceeding 100,000 yuan ($14,900) per square meter (10.8 square feet) — nearly 13 times the average monthly salary of workers in the capital last year.

The new policy “will further reduce the (de facto) selling price of the property and significantly lower the burden of buying a home” for families, the Beijing Municipal Commission of Housing and Urban-Rural Development said in a statement on Thursday.

“Shared-ownership housing will help contain speculation in the housing market, … accelerate the building of a fundamental and long-term mechanism in the market that suits the city as the national capital, and assist more people to fulfill (their aspirations) to own a home,” the commission said. “It will also help stabilize real estate prices.”

The Beijing government will also provide policy support for the program, including preferential land policies for developers, to ensure that prices of shared-ownership housing are kept lower than other homes of similar quality in the same locality, according to regulations issued by the commission that have been put out for public feedback.

Shared-ownership purchases will be limited to one per family, and applicants will need to satisfy a list of criteria set by the city government, such as having an official Beijing household registration permit, known as “hukou,” and not having previously owned a home in the city.

However, at least 30% of homes will be made available to buyers without a Beijing hukou and who do not own a property in the capital as part of government efforts to encourage high-skilled workers who are not officially registered as local residents to stay in the city.

Unmarried applicants must be at least 30 years old, and those who get divorced will have to wait for three years to apply, the government said — moves aimed at deterring people who deliberately get divorced in order to qualify.

Buyers who are found to have provided fraudulent documents for the program will be prohibited from applying for any government-subsidized housing for 10 years, according to the rules.

The Beijing government has been fighting a losing battle to contain home prices, which jumped 25.9% last year. The city stepped up controls in March with tougher down-payment requirements, higher mortgage interest rates, and a ban on individuals buying new apartments converted from commercial properties such as offices.

Beijing is not the first city to introduce a shared-ownership program. Shanghai rolled out a similar policy in 2010, but as of the end of 2015, the city had sold only 66,000 units through the program, an average of 11,000 a year, official data show. To put that into context, more than 115,000 homes were sold in the city in 2015 alone, according to property services company Colliers International.

“Shanghai’s shared-ownership housing has failed to play the role of stabilizing property prices due to limited supply,” a senior manager of a real estate research firm in the city told Caixin.

“Buyers of new homes in Beijing are mostly existing property owners looking to upgrade to better apartments, so shared-ownership housing, which is lower cost, is unlikely to have much of an impact,” she told Caixin. “But it may be more effective in dragging down average home prices in the city.”