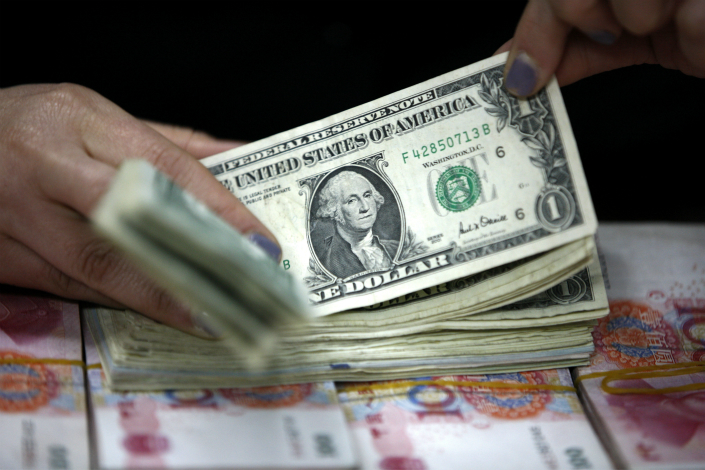 (Beijing) — China’s foreign exchange reserves increased for the sixth straight month in July, hitting the highest level since October, official data showed Monday, as the government continued its crackdown on capital outflows and a weaker dollar boosted the value of assets denominated in other currencies.

The reserves, the world’s largest, rose to $3.0807 trillion last month, up from $3.0568 trillion in June, data published by the People’s Bank of China (PBOC) showed. The increase of $23.9 billion was the second-highest this year and compared with a gain of $3.22 billion in June.

The State Administration of Foreign Exchange (SAFE) attributed the increase to a weakening of the U.S. dollar and stable cross-border capital flows. “Nondollar currencies generally appreciated against the dollar in international financial markets, pushing up foreign exchange reserves denominated in the dollar,” it said in a statement issued after the data release.

SAFE said that China’s economy has maintained a “stabilizing and recovering momentum” this year while cross-border cash flows and supply and demand for foreign exchange were “generally balanced” thanks to stability in international financial markets. “Boosted by these factors, the purchases of foreign currencies by residents and companies have become more reasonable,” it said.

Expectations that the yuan would depreciate against the dollar and pessimism over China’s growth prospects prompted a surge in capital outflows that started in late 2014. The capital account in the balance of payments began logging a deficit from the second half of 2014, and the yuan weakened by about 6.5% in 2016, which fueled the surge in capital flight.

The reserves fell for seven consecutive months through January 2017 and dipped below what analysts widely believe is the central bank’s psychological comfort level of $3 trillion that month, taking the total figure to its lowest level in six years.

Chinese authorities took a series of measures starting in the fourth quarter of last year to halt outflows of capital, including curbing domestic companies’ overseas investments and enhancing scrutiny of individuals’ requests for foreign currency. The reserves have recovered slowly since February due to the continuing crackdown on capital flight and stronger-than-expected economic growth momentum, which have helped ease fears of yuan depreciation.

Intervention by the People’s Bank of China in the currency market and a weakening of the dollar have helped the yuan to strengthen this year against expectations. The yuan rose 3.1% against the dollar in the first seven months of 2017 and last week gained for the fourth straight week to 6.7198 per dollar.

Meanwhile, there has been little let-up in the authorities’ campaign to prevent money leaving the country. SAFE in June announced that as of Sept 1, banks will be required to report on a daily basis all cash withdrawals made via overseas ATMs and spending of more than 1,000 yuan ($149) made abroad with domestically issued bank cards.

Last month, SAFE named and shamed 25 companies, individuals and banks that had transferred foreign currency abroad illegally or traded foreign exchange in violation of the law, as part of its efforts to “severely punish all kinds of unlawful or irregular foreign-exchange-related activities and crack down on fraudulent or deceptive trading.”