Could the Chinese Mainland Be the Next Hong Kong for Filipino Maids? 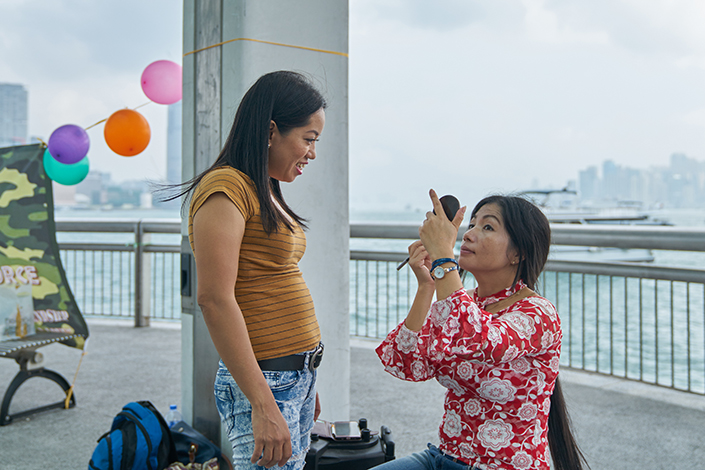 A senior Philippines official recently said he met with Chinese counterparts to discuss five major cities on the Chinese mainland that may soon welcome Filipino domestic workers. Above, two Filipino maids wait for friends at a party in Hong Kong in October. Photo: Visual China

(Beijing) — Filipino maids — common in Hong Kong, Singapore and many parts of the world — may get a new favorite home away from home: the Chinese mainland.

Filipino “household service workers,” as they are known back home, may be poised to march into the world’s second-largest economy. A senior Philippines official recently said he met with Chinese counterparts to discuss five major cities on the Chinese mainland that may soon welcome Filipino domestic workers.

If it happens, it would mark a huge change in the Chinese mainland. Only in August did China begin allowing expatriates in Guangdong province to hire foreign domestic workers. In April, one foreign maid was given a residence permit in Shanghai, allowing her to work for a foreigner.

Yet the Chinese mainland needs more domestic workers. Its population is aging rapidly, meaning help is needed for the elderly. Aging grandparents find it increasingly difficult to care for their grandchildren, as is common in China, which doesn’t have a strong day-care system.

Meanwhile, the decision to allow couples to have two children in China has led to a baby boom, meaning more children needing care. In addition, many working mothers may also see another attractive quality in employing a Filipino maid: Because English is an official language in the Philippines, Filipino maids would have the bonus of being able to teach children they watch over the language.

Philippine labor undersecretary Dominador Say recently told The Philippine Star newspaper that it is possible that the country’s domestic workers will be allowed to work in “five major cities in China, including Beijing, Shanghai and Xiamen.”

However, it is unclear what their monthly salary would be. In Hong Kong, foreign domestic helpers must live with their employers and are paid a minimum of HK$4,310 ($551) a month, get free food or a monthly “food allowance” of HK$1,037, plus room and board.

Authorities in China, including the Ministry of Foreign Affairs, have not confirmed the discussions. A China Ministry of Foreign Affairs spokesman replied to a Caixin inquiry saying, “I don’t have relevant information. But as Sino-Philippine relations improve, I believe both countries will have broader and deeper cooperation in the future.” The Philippines labor undersecretary said a delegation from China will visit the Philippines in September for further negotiations, according to The Philippine Star.

Chinese domestic helpers earn 4,757 yuan ($708) a month on average last year, according to the National Bureau of Statistics, but some can be paid 10,000 yuan per month, Chen Xiaoqing, the executive director at Fuping Development Institute, a private school for domestic helpers in Beijing.

Chinese women prefer other jobs over working as domestic helpers because of long work hours and stigma associated with it.  About 200,000 more domestic helpers are needed in the southern city of Shenzhen alone, according to the web portal.

News that the Chinese mainland may open up to Filipino maids, however, has stoked fears in Hong Kong that the city may have to compete with the mainland for them.

In interview with the Hong Kong-based South China Morning Post, Say sought to play down such concerns, saying that talks with the Chinese officials were as of now only exploratory.

Even if Filipino maids are allowed to work on the Chinese mainland, the impact would be limited, Chen said. Because of their English skills and professional training in the Philippines, they would usually take up jobs in the high end, Chen said and would not be interested in low-paid openings. But they will help improve the level of service across the industry in China, Chen said.