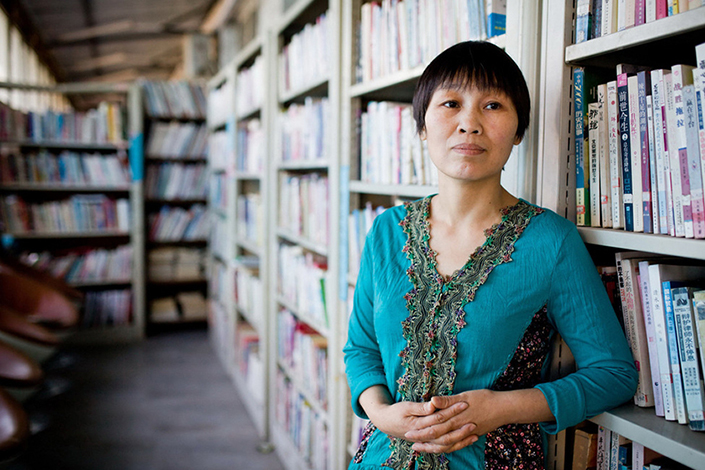 (Beijing) — The Picun community in the northern outskirts of Beijing is no different from other slums in big cities that are home to rural migrants. Its dirt roads littered with rubbish lead to shabby farmhouses, where nearly 10,000 residents live cheek by jowl in makeshift rooms.

But a literature club in the village that brings together construction workers, kitchen helpers and maids to listen to poetry, discuss fiction and hone their writing skills has suddenly pushed this squalid corner into the national spotlight. It all happened after an essay by one of its regular participants, Fan Yusu, went viral on Chinese social media in late April.

Fan, 44, is a domestic helper from a village in Xiangyang in Hubei province. She dropped out of school after ninth grade, but is a voracious reader who had devoured translated Charles Dickens and Daniel Defoe and has been learning to write nonfiction in the club since October 2014.

Her 7,000-plus-word piece, titled I’m Fan Yusu, details how the sweeping social and economic changes in China over the last three decades has transformed her life — first as a rural teacher yearning for life outside her small hometown, then as a wife who fled from an abusive husband, and now as a single mother who is trying to build a new life with her daughters in Beijing.

“My life is like a book that’s too sad to read — fate has bound me in a bad way,” she wrote. She expressed bitterness about how migrant workers like her are falling through the cracks as the gap between the rich and poor widens.

The piece was read over 3 million times in three days after it was published on April 24, and a steady trickle of local and foreign journalists and publishers have come to knock on her door.

Overwhelmed by her sudden fame and the prying cameras, Fan has “gone into hiding” in her hometown, said Wang Dezhi, the organizer of the literature group.

For many, the group that met on Sunday nights at a community recreation center served as a lifeline by creating a space to share their daily struggles.

“I’ve lived in many cities working on factory floors, but I only felt a sense of belonging in Beijing because the writers’ workshop in Picun is like a spiritual home,” said Hu Xiaohai, a 30-year-old who runs a grocery store in the village. Hu said he took up the pen about 10 years ago to write about his loneliness and boredom while working on assembly lines in the industrial hub of Guangdong and later in the Yangtze River Delta area, which accounts for nearly a third of the country’s exports.

Millions of farmers, many of whom had lost their land to development projects steamrolled by local governments, have flocked to big cities in search of better lives. While these foot soldiers were crucial to China’s march toward modernization in the past three decades, many have been crushed by the grinding ennui of the assembly line, insufficient wages and the institutionalized discrimination that bars those with a rural household registration document from accessing schools, government-run medical insurance and other public services in cities.

They are lost in the surreal landscape of gleaming skyscrapers, gated communities and bustling malls that are a giddy embodiment of China’s economic rise. And expensive recreation activities and entertainment events available to their urban peers are beyond their reach.

It is this wrenching echo of alienation and hardship felt by rural migrants that has allowed Fan’s work to strike a chord with so many readers, said Wang, who had worked as a kitchen helper, cook and factory foreman.

Fan, who works as a nanny for a rich family in the capital, has had to leave her daughters at a nursery in Picun village when they were young, while she lives at her employer’s house.

“I need to wake up at midnight to feed the 3-month-old baby girl of my employer...and at those moments I can’t help thinking of my own daughters,” she wrote. “At nights, without their mother sleeping beside them, would they have nightmares? Would they weep? I often cried.”

Her plain writing has won the hearts and minds of hundreds of thousands of readers, with many saying they were deeply touched by the modesty, honesty and dignity in her writing.

“Her work is eloquently written and touching, without laying bare the suffering she has gone through,” said one internet commentator.

“It’s been a long time since I was moved to tears and laughter by a work of literature,” said another.

“But the adversities that migrant laborers face each day, including unpaid wages, work-related injuries and discrimination linked to their children’s schooling, are far worse than what Fan has documented in her writings,” said Zhang Huiyu, an associate professor at China National Academy of Arts, who has volunteered to give presentations and writing workshops for the group since 2014.

Fan indeed takes a swipe at government policies that deny access to public schools for the children of migrant workers: “Damn it! The Ministry of Education!” she wrote. “Who made these policies to ruin the lives of children from migrant families?”

The personal essay was published on NoonStory, a public account on messaging app WeChat created by Zhang to publish original content from professional and amateur writers. Tencent Holdings Ltd., which operates WeChat, took down the article on April 27, according to Zhang, but the piece can still be accessed on several popular Chinese websites and continues to draw a large number of readers. Tencent has not issued a statement on its decision to remove the article and could not be reached for comment.

The piece resonates with a broader audience because Fan has refrained from heaping blame and stacking up complaints, but instead walks readers through candid reflections that prompts soul-searching, Zhang said.

Fan has signed a book deal with a publisher, according to Wang, the literary group organizer.

He has written about 400 poems since 2007 and plans to raise funds through an online crowdfunding platform to self publish them. But he humbly says “80% to 90% of my writings are just bitter ramblings.”

“I am happy for Fan’s popularity,” he said. “I wouldn't dream of the same success because I have very little education.”

Like Fan, he has been an active member of the literature group, and the two them share a literary role model — Xu Zhili, a Foxconn worker who took his own life in 2014. The 24-year-old, who worked at the Shenzhen factory that’s the biggest maker of iPhones, compared his colleagues to “a terra-cotta army whose youth is being chipped away by production lines.”

Hu said the line resonates with him and many others in the weekly reading club. The recreation center where they meet now has a museum for migrant laborers and a school for children who cannot attend public schools in the city because they lack a local “hukou,” or residency permit, Wang said.

It also organizes variety shows that allows migrants to showcase their talents.

At a recent performance to mark Labor Day on May 1, Xu Liangyuan, another member of the writing group, recited one his poems that talks about the difficulties in getting a residence permit in the city and violent crackdowns by city management officers, or “chengguan,” who target street vendors and other migrant workers.

The poem puts a spin on the lyrics from a popular song featured in the film Shining Red Stars. It is a classic about a bitter battle between the Communist Party’s Red Army and Kuomintang forces in the 1930s and reads as follows:

The Red Stars light up our fight

We play hide-and-seek with the chengguan

We’re street vendors who can never be scared away

We have our names printed on our residence cards

Our names are simply called dignity.