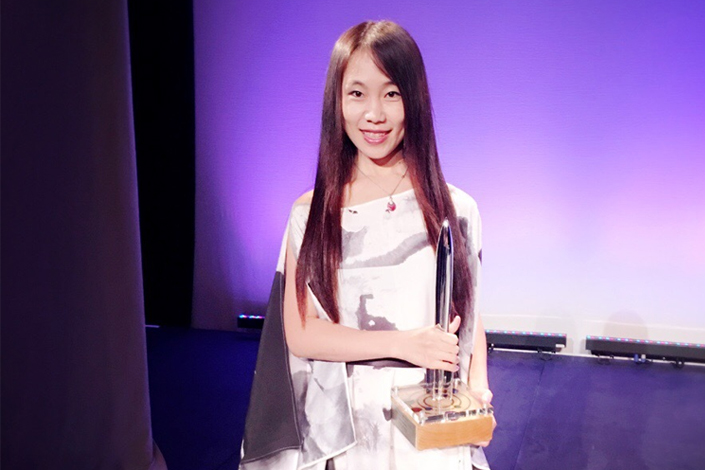 Sunlight is so scarce that it is rationed based on income. And Beijing is divided into three different physical layers for the elite, middle class and underclass, where people cannot travel between layers and rarely interact.

These are the grim scenes etched in author Hao Jingfang’s dystopian novelette Folding Beijing that won a Hugo Award in 2016, beating veterans like Stephen King. And although it is science-fiction, the story hits close to home for many Beijingers.

Hao, 33, is the first Chinese woman to win a Hugo, conferred by the World Science Fiction Society, and considered the “Pulitzer for sci-fi.” The genre, which was banned in China for nearly three-decades during the Cultural Revolution and Deng Xiaoping’s Anti-Spiritual Pollution Campaign to stem the import of western ideas, has made a comeback in recent years. Fellow Chinese author Liu Cixin, who became the first Asian to win a Hugo award in 2015, was nominated for the second time on Thursday for Death's End.

Hao says she chose sci-fi because it is “the freest genre” for the imagination, allowing her to provoke her readers to look at their reality from multiple angles — at the same time — and dig beneath the surface. In her award-winning novel, the protagonist is waste worker Lao Dao, who struggles to pay for his adopted daughter’s education. To make ends meet, Lao Dao courts danger, delivering secret letters between an illicit inter-class couple on the city’s first and second layers.

The work was inspired by a taxi driver’s complaints of how hard it was to admit his daughter to a school in Beijing. Inequality has been a recurring theme in the works of Hao, who holds a day job as an economics researcher at the China Development Research Foundation. It has also inspired her to use her award money to set up a social enterprise that aims to introduce art and science classes to schools in Guizhou, one of the poorest provinces in China, and Hebei.

“The classes will be about nature, the universe and art,” said Hao. “In poor provinces, the schools teach mathematics and Chinese, but students don’t have the chance to get in contact with science and art.”

In an interview at a café near Beijing’s historic Lama Temple, Hao talked about her writing journey, the resurgence of Chinese sci-fi and her decision to become a social entrepreneur. The following are excerpts of that interview with Caixin edited for clarity and length.

Caixin: Were you interested in science fiction as a child?

Hao: Actually, I only became a science fiction fan in high school, specifically the second year of high school, but I loved reading since I was young, I loved fairy tales, classical works and Sherlock Holmes. I even read several pieces from classical authors like Charles Dickens and Jane Eyre. I also loved Wuxia stories (heroic martial arts fiction set in imperial China) and love stories. I would read everything. I only started liking science fiction when I started studying physics, new techniques, the universe and other things.

So science brought about your love for sci-fi?

Yes, I loved quantum physics and astrophysics. I actually studied astrophysics in Paris at the CEA (The French Alternative Energies and Atomic Energy Commission This was part of an exchange program, while she was studying at Tsinghua university in China). The center is for the fundamental science studies.

But what inspired you to start writing?

I loved writing because I loved reading. I started writing stories in my Junior Middle School when I was 13 or 14 years old. I had a really good Chinese teacher. She allowed us to write anything. We would be in little groups writing, sharing ideas. We also shared the stories and read the works. That period of my life was really enjoyable, and I always remember that feeling of (joy) from writing at the beginning of my career. It was only for fun.

When you first posted Folding Beijing for free on a Tsinghua university server, was that also for pleasure?

Yes, when I was in school, I had lots of time.

I am very surprised that studying physics, especially quantum physics, gave you a lot of time?

Perhaps that’s why I didn’t become a scientist! I was a good student, but not one good enough to become a scientist. Probably 95% of the physics students entered other fields after graduation. Only 5% to 10% of the top students became real physicists.

Is sci-fi an effective tool for investigating social issues?

I think science fiction is perhaps the freest genre for me to set my characters and everything else according to my opinion. Because in pure literature, I need to make sure I have the whole background and the reality of the people. You cannot just change the reality, if you do that the readers will be like ‘oh no! Life isn’t like that’. In science fiction you’re free, you can set the stage and tell readers, life is this, and you can form other stories on that stage. In my longer novel, I created one society on Mars and another on Earth, and then I can compare different policies and methods in these two places. The two societies can mirror each other. This is the kind of freedom I cannot find anywhere else.

In fantasy, readers aren’t into the logic, the technique. They would like to see a magical world… they hope for something illogical to happen. But in science fiction, people care about all the logic behind the stories, the background, why is this possible, why it is not. People do have these kinds of serious discussions that I find interesting.

Stories are mirrors… and (they help you) make more meaning of your own world. I think that we live in a world of possibilities, like parallel universes. At any moment the universe could split into thousands of possible worlds. You can only enter one of those realities. But the stories would depict all the other possibilities.

Ten years ago, there weren’t many science fiction writers in China, only a small group of high school and university students, especially those in science and engineering. Perhaps it’s because the sci-fi movies and TV series were not so popular and not good. But now after the Three Body Problem (the first Chinese novel to win a Hugo award in 2015), everyone is talking about artificial intelligence and genetics and new technologies. It is all coming from real life… and people say “we have to talk about it, what will happen?” In the past, major media didn’t give many channels for the sci-fi genre; we were quite ignored by them. But this year many (leading) websites such as Sina and Tencent have opened their own science fiction channels.

Have you got a group of people devoted to your writing?

No, (laughing) I don’t really like to meet fans. It’s easier for me to write for somebody as an imaginary reader. I think writing is a lonely thing. I write to enjoy the loneliness.

Is being a sci-fi writer profitable?

In the past, it wasn’t. Before I got the Hugo award, I seldom got any money from my books. I got about 10,000 yuan for a book. We can sell about 5,000 to 10,000 copies of a book, that’s all. I must admit I sold more books after the award, but I am not sure about the future. The news itself was hot in the media last year, but maybe next year everything will get back to normal. It’s normal to have just a small circle of fans.

What is your next project?

My new project is not a writing project. I have started a social enterprise called Tong Xing Shu Yuan. We organize cultural activities and educational programs (at tourist resorts) and we earn an income and give the resources to poor children in (less developed) provinces…

We offer classes to children and make hutongs (old courtyard houses) into open galleries and hold exhibitions and host salons and culture talks to get more people involved in art creations. This project is called Folding and Co-existence. We want to make an open, artistic environment in Beijing. In hutongs, there are migrant workers who have brought their children to the city. They are quite poor although they are living in an area that is quite expensive in China… If the project continues, I hope that it will create an environment, where people from different backgrounds can mix and meet through art. I am fascinated by the idea that art can connect people.