By Aries Poon and Leng Cheng 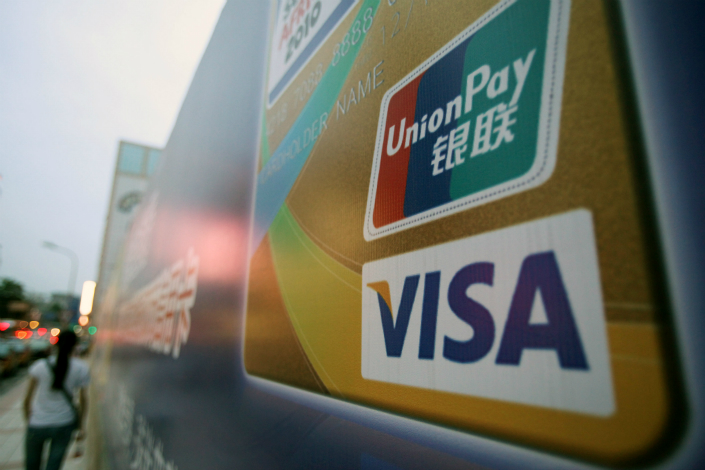 Visa Inc. is seeking permission from the People's Bank of China to clear its own bank-card transactions, a market that wasn't officially opened to anyone else on the mainland except China UnionPay until May. Photo: Visual China

While global bank-card network operators, including Visa, can issue credit cards jointly with domestic Chinese banks, non-Chinese players have long been denied direct access to the country’s growing card-clearing market, and thus must rely on UnionPay’s clearing system. Although the World Trade Organization ruled in 2012 that China was violating WTO rules by requiring all yuan bank-card transactions to be handled by the UnionPay network, the clearing market wasn’t officially opened until May.

“Visa has filed an application with the People’s Bank of China in order to participate in the Chinese domestic market as a Bank Card Clearing Institution. China is one of the world’s fastest-growing payments markets and is leading the way in payments innovation,” the company said in an emailed statement to Caixin on Tuesday.

Other major non-Chinese card companies are gearing up too.

Last week, Mastercard Inc. CEO Ajaypal Banga told investors that the company had been in “active conversations” with China’s central bank and potential local partners over the last two years.

“We are working through our options for a joint venture or a 100% Mastercard application and expect to make a decision on this and file soon,” Banga said.

American Express Co., another major card company, told Caixin that “we’re encouraged by the final guidelines (about China’s card-clearing market) and it is our intention to apply for a license.”

Despite China’s affluence, the UnionPay network is losing out to third-party payment providers as consumers prefer to pay by scanning QR codes with their smartphones. QR-code-based transactions are not routed through a bank-card network, but through the central bank-administered clearinghouse designated for online payments.

China UnionPay had said it plans to grab some traffic back to its clearing network by pushing for a wider adoption of its Near Field Communication (NFC) payment technology, known as QuickPass. Mastercard also said it plans to expand its scan-to-pay program, Masterpass QR, to more Asian countries this and next year.

Last year, 115.5 billion transactions were completed with debit and credit cards, up 35% from 2015. Mobile payments, which are dominated by third-party payment service providers, were behind with 25.71 billion transactions in 2016, but registering an impressive 86% year-on-year growth.

The real contest has yet to begin.

Market-watchers warned of restrictions to expanding in China, including potentially an absence of an even playing field for foreign network operators. Working through Chinese government red tape and gaining more bank and merchant acceptance could be difficult. It will likely take a long time for Visa and Mastercard to gain significant market share there, analysts said.

“It is important that we get it right ‘out of the gate.’ Remember that this is just another step in the process that will likely play out over the next 12-18 months as there are several review cycles from the Chinese regulators,” Mastercard’s Banga said last week.