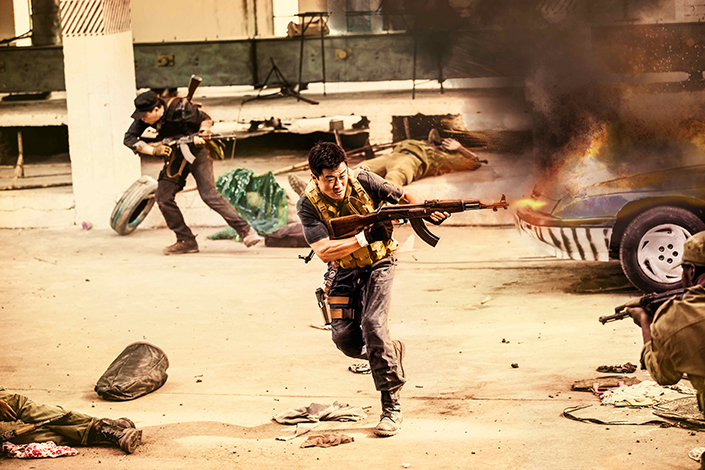 A rebellious former soldier flaunts his manliness in a war-besieged region of Africa in a fast-paced and nationalistic new film that has ascended to the top of China’s box office.

On the screen, the hero saves fellow Chinese and local civilians from a band of tyrannical mercenaries — while at the box office, it has rescued China’s sagging movie sales, becoming the top-grossing Chinese-language film of all time.

In less than two weeks in theaters, “Wolf Warrior 2” has reaped 3.5 billion yuan ($520.74 million), unseating the 2016 environmental fantasy “The Mermaid,” which pulled in 3.3 billion yuan in a two-month run, according to figures from local box-office tracker Maoyan.

Analysts say the new record has come just in time: Box office earnings in the first half of the year have inched up 3.7%, an anemic uptick after a sluggish 2016.

Rather than a cast of eye-pleasing, overpriced young idols, it is “the strong storyline and willingness to go all out that sets this winner apart,” said Song Ziwen, film critic and editor-in-chief of China Film Report.

“Its unexpected success will point Chinese filmmakers in the right direction at this crucial turning point, when much of the industry is completely at sea,” Song added.

The film contains adrenaline-packed scenes, with lead actor Wu Jing — who also directed the movie — putting his martial-arts mastery on riveting display. More importantly, however, the storyline plays the patriotism card, with the protagonist repeatedly emphasizing national pride and a sense of solidarity with overseas Chinese.

In an uplifting climax, Wu uses his arm as a pole to fly the Chinese flag. Minutes later, during the closing credits, we see writing on the back of a Chinese passport, with the film’s unequivocal theme: “Citizens of China, when you find yourself in trouble or danger, wherever you are in the world, do not give up! You have the support of a strong nation.”

Although some have criticized the film for exploiting national pride, Song thinks that flag-waving productions are nothing to be ashamed of. “Nationalism has always been a proven ingredient for a crowd pleaser, and we may see more of that as people become increasingly proud to call themselves Chinese as they go abroad.”

This sequel to the original 2015 “Wolf Warrior” has far surpassed the 37 million yuan in box office of its predecessor — which featured the same director and largely the same cast. The sequel also set records for ticket pre-sales and single-day sales in China, the latter of which peaked at 400 million yuan.

More bullish outlets — such as box office site Xiniu Entertainment — say it is reasonable to expect “Wolf Warrior 2” to strike above the 5-billion-yuan mark, securing a position that is unlikely to be dethroned within the next three years.